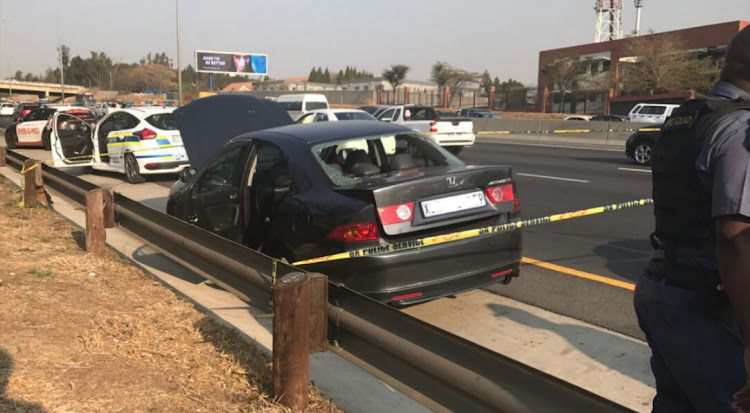 The suspicious vehicle was discovered by police in Johannesburg on 6 September 2017.
Image: Supplied

Johannesburg police made a grizzly discovery on Wednesday afternoon after they spotted a suspicious vehicle parked in Rivonia road.

Police noticed that the vehicle's back window was smashed out and found the body of a suspected house robber on the back seat.

Emer-G-Med operations manager Jurgen Kotze said the dead man had been part of a gang that had tried to rob a house in Randpark Ridge earlier in the afternoon.

Kotze said the owner of the house came across the suspects and started shooting at them with his personal firearm.

"They (the suspects) then jumped into their car and drove away as the homeowner was firing. It appears as if they came to a standstill after Rivonia‚ heading North-bound‚ probably after seeing that the suspect had been shot dead‚" said Kotze.

The suspects had fled the scene by the time the police arrived.

'We are shattered': Man killed in mob attack was helping friend

Mlungisi Nxumalo's only crime was looking after his best friend's 11-year-old son - an act of friendship he paid for with his life.
News
4 years ago

The State is hoping a forensic report which could link two men to the vehicle which was driven by a gang of gunmen who shot and killed Rhythm City ...
TshisaLIVE
4 years ago

Sixteen people were arrested on Tuesday night after being found in possession of copper stolen from the City’s underground tunnels.
News
4 years ago

Imagine you happen to be in the area when a gang of armed robbers strike a cash van and some of their loot is left behind. Would you go for it?
News
4 years ago