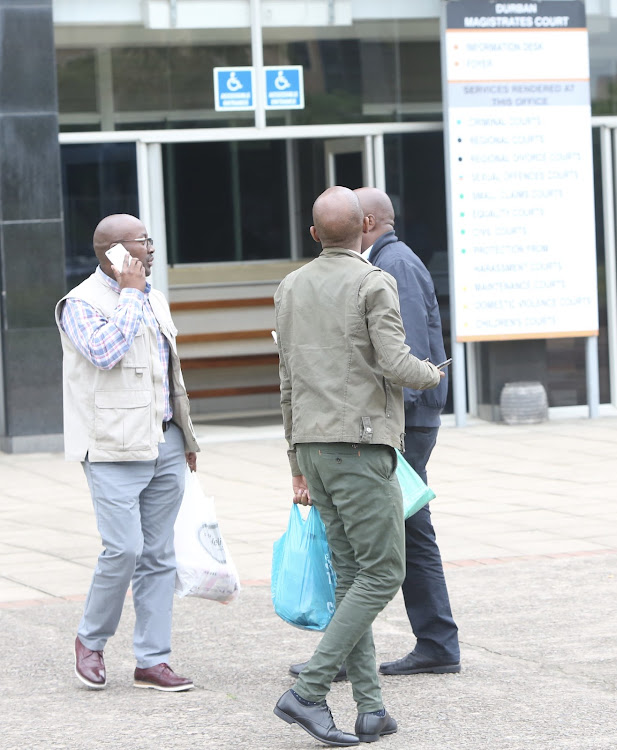 The Hawks swooped on Mandeni mayor Sphesihle Zulu’s three bodyguards while he was in his car near a Durban golf club on Tuesday afternoon.

The bodyguards - Silence Mkwakwa‚ Khayalihle Mzila and Lucas Mthembu - were arrested and charged with unlawful possession of firearms.

According to police minister Fikile Mbalula‚ the bodyguards are employed by the same private security company as the two men who featured in a video that went viral of them brandishing firearms. The two men were assigned to the security detail of ANC eThekwini regional secretary Bheki Ntuli.

Mkwakwa has been part of the northern KZN mayor's security detail for three months.

On Wednesday the trio‚ who were in police custody‚ appeared before magistrate Mohamed Motala in the Durban Magistrate’s Court.

None of them had secured legal representation.

The three men told the court that they did not have previous convictions or pending criminal cases against them.

Two men‚ threatening to kill a "dog" - with one of them brandishing an AK-47 - have been confirmed as the bodyguards of one of the ANC's senior ...
News
4 years ago

“You have an obligation to be as honest as possible‚” said Motala.

The prosecution did not object to the trio being granted bail.

Motala released them on warning rather than bail and ordered them to appear in court again on November 23.

“I’m going to trust you and release you on warning.”

A police source told TimesLIVE that the three men were arrested on Tuesday afternoon while Mayor Zulu was seated in his car‚ near the Mount Edgecombe Golf course.

AK-toting bodyguards in viral video should be criminally charged: experts

The source said the guns seized - four pistols‚ one rifle and live rounds of ammunition - will be sent for ballistic testing to determine whether they were used in the commission of any crime.

In an earlier statement released by the Hawks‚ police minister Fikile Mbalula said: “People must understand that guns have caused many heartache in many families and brandishing of guns cannot be tolerated‚ I sincerely hope that people will desist showing off their guns and endangering society.”