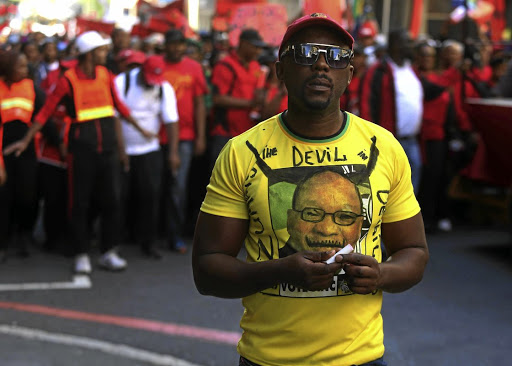 Cosatu in the Western Cape used Wednesday's nationwide march against corruption and state capture to have a go at longtime rival, premier Helen Zille.

After delivering a memorandum to the Passenger Rail Agency of SA about the poor state of Metrorail services in Cape Town, Cosatu provincial secretary Tony Ehrenreich told the crowd that they would not march to Zille's office, but he changed his mind when the marchers objected.

"The premier has shown her involvement in state capture by going to lunch with the Guptas and taking money from them. These political leaders have never made public their donations," the memorandum read.

"Zuma is corrupt and has his hands in the public purse, but so are Zille and [Cape Town mayor Patricia] de Lille, who have pushed the poor out of the city centre and onto Blikkiesdorp with little services."

The National Joint Operational and Intelligence Structure (NatJOINTS) says it is pleased with the manner in which the security forces policed the ...
Politics
3 years ago

At the entrance to the Western Cape legislature, which was cordoned off by police, Ehrenreich read the list of demands, which included "dismantling the network of predatory elite".

He was prevented from entering the building, so he slipped the list under the door.

Zille later tweeted: "I was in a cabinet meeting discussing the water crisis."

"We want the bosses of Metrorail to go to jail for endangering us,'' Ehrenreich said.

Walker accepted the memorandum and said: "We are aware of the difficulties you face out there."

The KwaZulu-Natal Department of Education have found themselves at odds with trade union federation Cosatu – threatening to withhold pay for teachers ...
News
3 years ago

The Eastern Cape town of Mthatha came to a standstill on Wednesday as hundreds of workers under the banner of Cosatu painted the town red as they ...
Politics
3 years ago

He promised to look into the marchers' demands and provide feedback.

Ehrenreich then shouted: "Jy gaan tronk toe!" (You are going to jail).

The crowd then marched to the gates of parliament, where they were addressed by SACP first deputy general secretary
Jeremy Cronin.

"Down with state capture!" Cronin screamed.

"R27-billion is being looted out of the public purse every year. R170-billion, at least, is being taken out of the country by the private sector," he continued.

"People are making lots of money, but services are getting worse. They are making billions by screwing those who are poor."