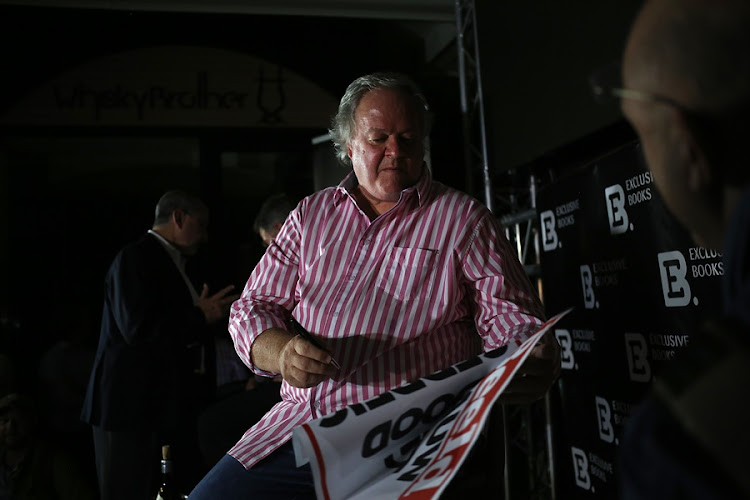 The South African Revenue Service has followed through on threats to take legal action against the author of The President’s Keeper’s‚ Jacques Pauw.

Pauw’s bombshell book contained revelations over the tax affairs of President Jacob Zuma‚ including that he was paid a R1-million a month salary for at least four months after he became President in 2009.

The payments‚ according to Pauw‚ were made by long-time Zuma ally‚ Durban businessman Roy Moodley.

SARS‚ in papers filed in the Western Cape High Court on Friday‚ is seeking a declaratory order affirming its position that Pauw contravened confidentiality clauses in the Tax Administration Act by publishing the information and‚ in so doing‚ broke the law.

The application relies on an affidavit by SARS Commissioner Tom Moyane.

“The declaratory orders sought…are necessary given the importance and magnitude of the contravention‚” Moyane’s affidavit reads.

Journalists Jacques Pauw and Pieter-Louis Myburgh will not be presenting themselves to Durban North police station to make statements relating to ...
News
4 years ago

“Such declaratory orders are imperative in order to give confidence to the public knowing that taxpayer information would not be willy-nilly disclosed by third parties who have no authority to be in possession of such information and to disclose it without consequence.”

The papers go on to cite every single “contravention” of the Act SARS could find in Pauw’s book‚ which takes up some 14 pages of numerous extracts.

Pauw told TimesLIVE on Tuesday that he was not worried about it at all‚ but could not fathom what SARS’ motive could be.

He said he did not perceive the court application as an attack on the credibility of his book‚ but that in effect SARS had confirmed the allegations relating to Zuma’s tax affairs‚ among other things.

“I could only have contravened the act if what I published was true‚ otherwise I have written a fiction which can’t be a contravention of any law.

SARS Commissioner Tom Moyane is sitting with the loaded gun that could see President Jacob Zuma removed from office or absolved of wrongdoing over ...
Ideas
4 years ago

“I don’t understand what they are trying to achieve. They have already laid charges against me at the Hatfield police station for contravening this act‚” Pauw said.

Pauw said he and his legal team would strongly argue that legislation could not be used to hide a crime.

“I don’t think any journalist has ever been charged under the [Tax Administration Act]‚ so it will be very interesting. But we will go to court and challenge them.”

NB Publishers said in a statement on Tuesday that it would continue to support Pauw and that it stood by the book.

“We believe that by bringing this application‚ SARS has conceded the truth of the parts in the book it names in the application‚” the statement read.

“We are proud to say we will defend our author and the book vigorously against Mr Moyane’s application because there is clear and compelling public interest in The President’s Keepers revealing that President Jacob Zuma has perverted the law-enforcement agencies of this country to hide the fact that he is not tax compliant and that he received a salary from Roy Moodley’s company while in office.”

The application was not filed as urgent‚ and is expected to be heard early in the new year.

The investigating officer in the case against The President’s Keepers author Jacques Pauw and fellow investigative journalist Pieter-Louis Myburgh ...
News
4 years ago

10 of the most compelling local books of the year

In the world of fiction and non-fiction, 2017 has seen South African writers pour their hearts out in the most fascinating reads
Lifestyle
4 years ago

These courageous journalists need our support

The deep dysfunctionality in our criminal justice system will be exposed in the coming days as the police attempt to arrest investigative journalists ...
Ideas
4 years ago