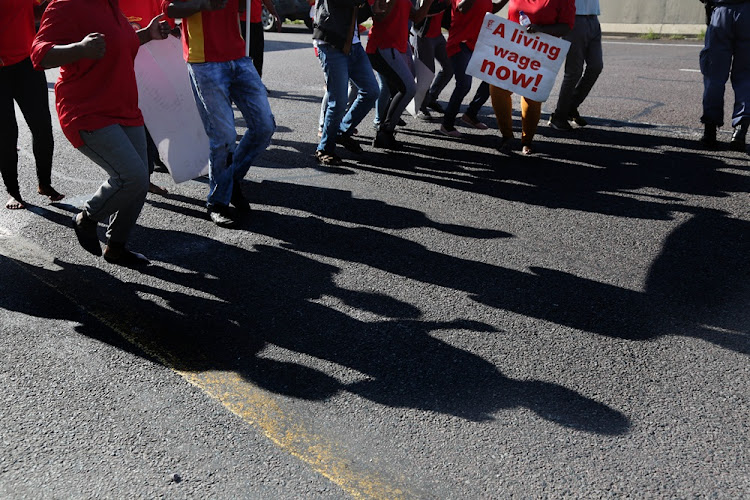 The South African Federation of Trade Unions (Saftu) and its affiliated unions in the Western Cape plan to march in Cape Town on Thursday.

The protest is against proposed amendments to the labour law that the unions say threaten the minimum wage and undermine the right to strike.

Parliament is currently considering amendments to the Labour Relations Act‚ the Basic Conditions of Employment Act‚ and the new National Minimum Wage Bill. If passed in the current form‚ the unions say the amendments will have serious implications and erode legislative progress made by workers.

Changes to the Labour Act – which will require trade unions to decide on strikes through secret ballots – were proposed ostensibly to minimise violent strikes‚ but the unions say it will result in more unprotected strikes.

Amendments to the National Minimum Wage Act will remove the set monthly minimum wage of R3‚500‚ and leave only a set minimum hourly wage of R20. People who work less than 40 hours a week will make less than R3‚500 per month‚ say the unions. “We think this is not a living wage‚” said Saftu provincial secretary Andre Adams.

Adams said after the workers’ march to Parliament‚ they would also march to the Civic Centre to protest recent water tariff hikes. “We are against the water tariffs people have to pay because of the City’s own poor planning for the water crisis. We expect workers from our 14 affiliates in the province.”

Marchers are expected to gather at Keizersgracht at 10am on Thursday.

South Africa is the most unequal country in the world. This is according to a new report by the World Bank that listed 149 countries.
News
3 years ago

The South African Federation of Trade Unions (Saftu) has demanded a complete ban of child labour.
News
3 years ago

Creating 500‚000 jobs a year for the youth is possible: Ramaphosa

Creating half a million jobs a year for young people is a possibility‚ President Cyril Ramaphosa said on Tuesday during the launch of the Youth ...
Politics
3 years ago