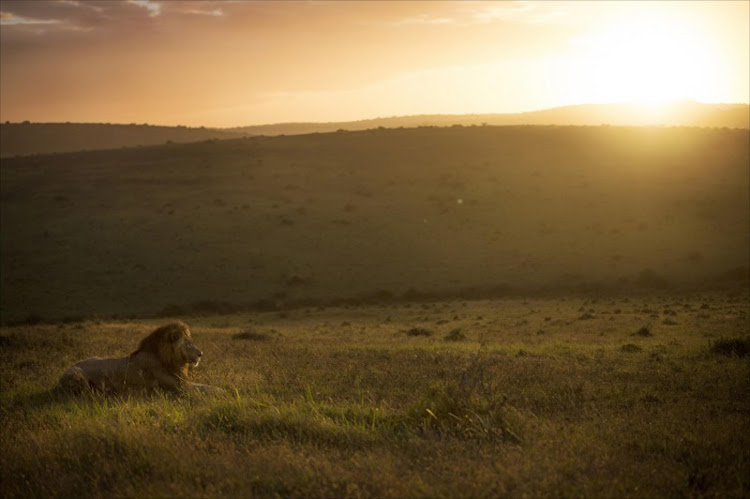 News of the death of a poacher emerged on Wednesday after reserve rangers found human remains in the lion enclosure.
Image: Ryan Rapaport. File photo

Lions on the Sibuya Game Reserve outside Kenton-on-Sea in the Eastern Cape are believed to have killed a suspected rhino poacher who was attempting to stalk the animals.

News of the death of a poacher emerged on Wednesday after reserve rangers found human remains in the lion enclosure.

According to officials‚ the discovery was made at 7pm on Tuesday night but‚ due to bad lighting and it not being safe to enter the lion enclosure‚ police returned on Wednesday morning.

By afternoon‚ the police airwing helicopter had flown over the reserve to assess if there were more poachers in the area.

The find led to the vet tranquilising all six lions in the camp at 8am on Wednesday.

Forensic experts and detectives on the scene found a hunting rifle‚ with a silencer attached‚ as well as a long axe and wire cutters.

The human remains were found scattered in various parts of the bush.

Police spokeswoman Captain Mali Govender confirmed that the remains had been found in the lion camp and that detectives were on the scene.

Environmental monitor Phakamani Nyawo (26) based at Umkhuze Game Reserve in KwaZulu-Natal is one of 1 659 monitors who have been entrusted by South ...
Features
4 years ago

“Due to poor light (Tuesday night) the scene could not be processed. On Wednesday morning‚ investigators and specialists combed the scene and managed to retrieve remains which were taken by the department of health to conduct forensic testing. A rifle and an axe were found at the scene‚” she said.

Asked if the person was thought to be a poacher‚ Govender said that they were unable to speculate. “The identity of the person also remains unknown‚” she said. “The firearm has been taken by police and will be sent to the ballistic laboratory to establish if it has been used in any other poachings or crimes.”

Attempts to get hold of the reserve owner‚ Nick Fox‚ have since failed.

In June 2016‚ the reserve saw two white rhinos killed and a third die later after sustaining serious injuries from the poaching.

This year already‚ nine rhinos‚ all of which were shot with a high-calibre hunting rifle‚ have been killed by poachers on Eastern Cape reserves.

Last week saw Bella‚ a rhino at the Kragga Kamma Game Park‚ killed only two weeks after being de-horned.

The Sibuya reserve is situated fairly close to Port Alfred where three rhinos were killed in May.

South Africa is blessed with spectacular natural treasures. However‚ species are being lost at an alarming rate and radical efforts are needed to ...
News
4 years ago

An anti-poaching guard tasked with protecting rhino at a private KwaZulu-Natal game farm was seriously injured when a buffalo charged him on Thursday.
News
4 years ago

A prominent 54-year-old businessman and his 21-year-old wife will appear in an Mpumalanga court on Thursday for the alleged possession of an illegal ...
News
4 years ago