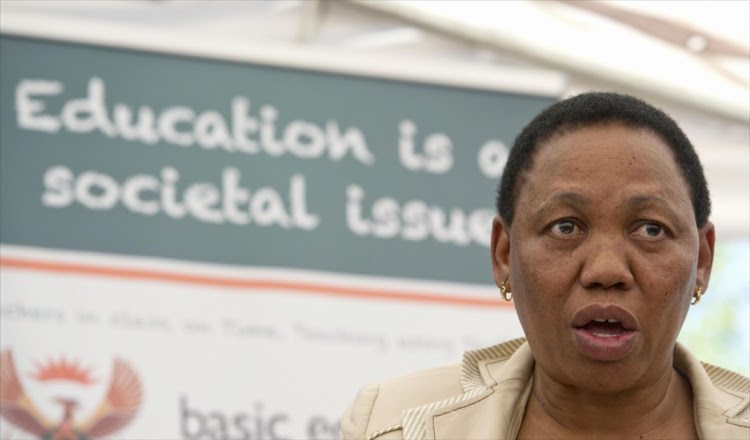 Along with the department of education being told to fix loopholes in its school infrastructure plans, Angie Motshekga has also been ordered to pay Equal Education’s costs.
Image: Gallo Images / Foto24 / Deaan Vivier

The Department of Basic Education said on Thursday it was studying the judgment handed down by the Bhisho High Court in the Eastern Cape‚ which effectively ordered the government to fix loopholes in his school infrastructure plans.

The court ruled in favour of Equal Education’s (EE) application to compel Basic Education Minister Angie Motshekga to fix the “loopholes” in the legislated minimum norms and standards for school infrastructure. EE argued the loopholes in the law have allowed government to get away with not fixing schools and impede on pupils’ rights to safe and dignified schools.

“We will study the judgment with a view to incorporate the court ruling into the changes currently underway‚” the department said. “The judgment comes at a time when the Department was at the final stages of concluding amendments to the regulation on the norms and standards for school infrastructure provision.”

The court also ruled some of the regulations in the norms and standards were unconstitutional and invalid.

The department said it had built 205 schools to date of as part of the Accelerated School Infrastructure Delivery Initiative programme which aims to eradicate the backlog of schools without water‚ sanitation and electricity. The initial target for this project was 510 schools‚ but has been revised to 367.

“5‚225 maintenance projects were underway around the country and the Eastern Cape had by March 2018 already exhausted its maintenance budget. In addition‚ the department introduced a 12% minimum budget for each province to be dedicated to maintenance‚ this step was taken to compel provinces to set aside funding for maintenance because some provinces were not budgeting for it.”

The ruling brought an end to the application that was brought two years ago. Motshekga was also ordered to pay EE’s costs.

While the world celebrated the centenary of Nelson Mandela – a man who believed in equal education for all – parents kept their children home from ...
News
4 years ago

The Bhisho High Court has ruled in favour of Equal Education's application to compel the minister of Basic Education‚ Angie Motshekga‚ to fix the ...
News
4 years ago

Equal Education (EE) has unveiled the panel that will investigate allegations of sexual harassment against its former treasurer‚ Doron Isaacs.
News
4 years ago