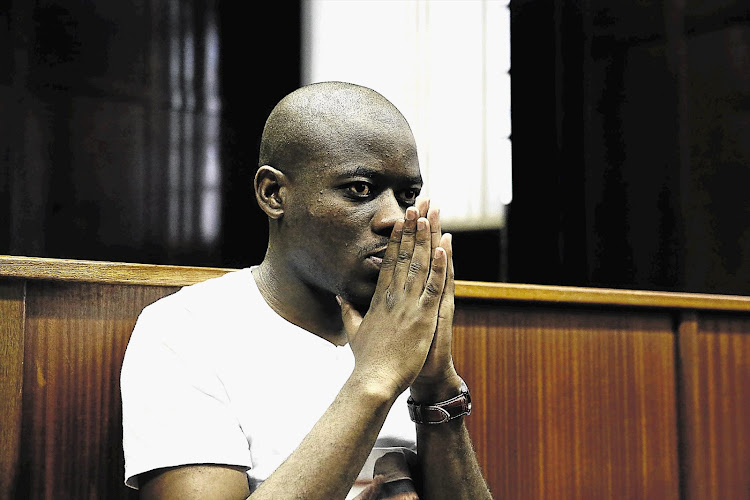 #FeesMustFall activist Bonginkosi Khanyile has been convicted on charges of public violence‚ failing to comply with a police instruction and possession of a dangerous weapon.

The student of the Durban University of Technology appeared in the Durban Regional Court on Monday before Magistrate Siphiwe Hlophe.

The public gallery was a sea of red‚ with members of the EFF Students Command showing their support for the popular activist.

Nearly three years after his arrest in 2016‚ during the height of national student unrest‚ Khanyile made an admission that would ultimately result in a guilty verdict.

#FreeBonginkosiKhanyile - Khanyile made admissions in terms of 4 of his 13 charges. He was acquitted on 9 others he faced at the outset of his trial @EFFSouthAfrica

Khanyile‚ through his advocate Danie Combrink‚ admitted that during the violent protest action he had disturbed the public peace‚ used a slingshot to stone police and ignored their pleas to disperse.

Using these admissions‚ coupled with evidence led by the state when the trial commenced last month‚ Hlophe found that the evidence was unchallenged.

“The court finds that on September 27 2016‚ the accused committed the crime of public violence. He unlawfully assembled with intent to disturb the peace and public security and intentionally struck the police with stones using a slingshot‚” he said.

“The court finds that on February 4 the accused participated in a public gathering at the Durban University of Technology and failed to comply with a police instruction to disperse. Accordingly he is found guilty.”

The slingshot was deemed to be a dangerous weapon. “His actions caused the public peace to be disturbed and he was also aware of that. He was aware at the time that a sling[shot] was a dangerous weapon capable of hurting someone‚” said Hlophe. Khanyile will return to court on October 16 for sentencing.

Fees Must Fall activist Khanyile to appear in court

Student activist Bonginkosi Khanyile‚ arrested at the height of the free education movement in 2016‚ is expected to appear in the Durban Regional ...
News
3 years ago

Yet another lawyer has fallen out of favour with Fees Must Fall activist Bonginkosi Khanyile.
News
3 years ago

Fees must fall activist graduates... a day after being suspended

Controversial Fees Must Fall activist Bonginkosi Khanyile graduated with a Degree of Bachelor of Technology in Public Management at the Durban ...
News
3 years ago

Student leader Bonginkosi Khanyile was released from police custody on Friday afternoon after several hours behind bars.
News
4 years ago

Bonginkosi Khanyile's voice is loud and clear‚ and those around him don't just hear him but lap up every word.
Politics
4 years ago