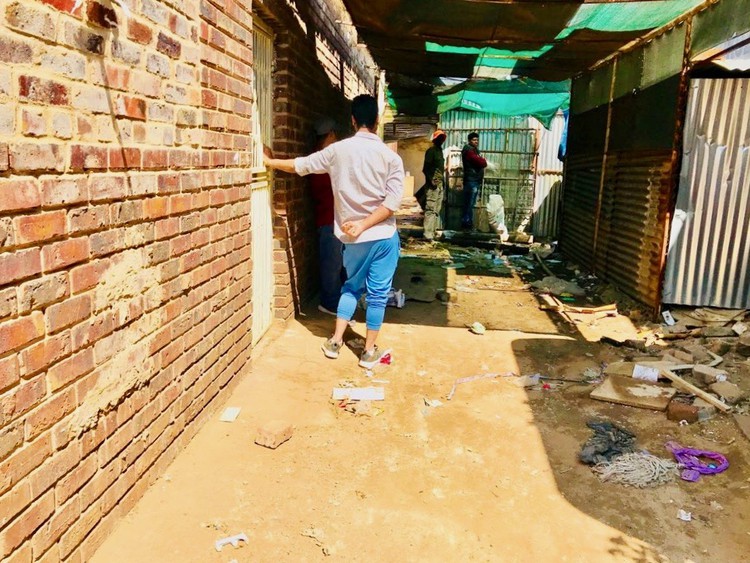 A Chinese man returns to Ratanda to see if there is anything left to salvage from his shop.
Image: Kimberly Mutandiro

“The problem is that whenever protests happen some community members always takes out their frustrations on foreign shop owners. They never take time to think of how the rest of the people will suffer‚” said David Sibanyoni‚ a community committee representative in Ratanda‚ south of Heidelberg‚ Gauteng.

Immigrant-owned shops‚ belonging to people from Somalia‚ Bangladesh‚ China and Pakistan‚ have been closed since Monday last week after they were looted by residents protesting over poor services from the Lesedi Municipality.

“We are trying to come up with a solution… The majority of community members say they will starve if the Somali shops remain closed‚” said Sibanyoni.

Many in the Ratanda community rely on foreign-owned shops. Now they have to travel further afield. “Travelling all the way to town to buy bread or a cold drink is absurd. People should swallow their pride and allow the Somalis to operate‚” said Mojabang Radebe‚ a salon owner.

Mokile Nkosi‚ who has been renting a shop to a Somali man for five years‚ said her tenant had run away. Community members had also threatened to burn down her house with her and her three children inside if she continued to rent to the Somali man. They looted everything in the shop.

“l was terrified and was left with no choice but to hand over the keys. The R1‚500 which l used to get from the Somali every month helped me a lot because l am a widow‚” said Nkosi. “I am a woman. Being terrorised in such a way is the last thing I need.”

Mahommed Shamim‚ a shop owner‚ said that all he wants to do is to operate his business and help the community. He said he often sold goods on credit and people would pay him at the end of the month. Some never paid‚ but he didn’t pursue them for their debts. Shamim said he did not understand why some in the community hated foreigners so much. He said it was not true that they sold expired goods.

No 'fake food' found after inspections at 470 shops in SA

No “fake food” has been found by the health department after countrywide inspections of more than 400 small shops.
News
3 years ago

On Sunday‚ GroundUp saw community members‚ including young children‚ entering the abandoned shops looking for any remaining food. Scrap material dealers also stripped what they could.

Some residents were xenophobic. They said foreigners should leave the community permanently. “They should give us some space to breath. Everywhere you go there is a Somali‚ Pakistani or Chinese shop. We are tired of them‚” said Bafana Khumalo. He operates a shisa nyama stand which was next to a Somali-owned shop in Ratanda extension 7.

Khumalo said‚ “The problem is that they sell expired tinned food and fake goods. After that‚ they expect the community to be quiet. l think it’s a good thing that they be permanently removed from our area.”

Thabo Mokoena‚ living in Ratanda extension 23‚ said‚ “Their [immigrants] problem is that they do not create job opportunities for us. Why do they not teach us the same business skills so we can fend for ourselves… They only care for themselves. They do not bank money; at least that way they would be taxed in order to help the economy.”

Others said that they were jobless because nearby firms hired foreigners as cheap labour.

Captain Tivhulawe Tshilate of Heidelberg police said the situation was under control. “We have made 54 arrests so far; 12 of the perpetrators were youths under the age of 18. The adults are under police custody while the younger ones are under parental custody. We will deal with anyone who dares to cause any more trouble.”