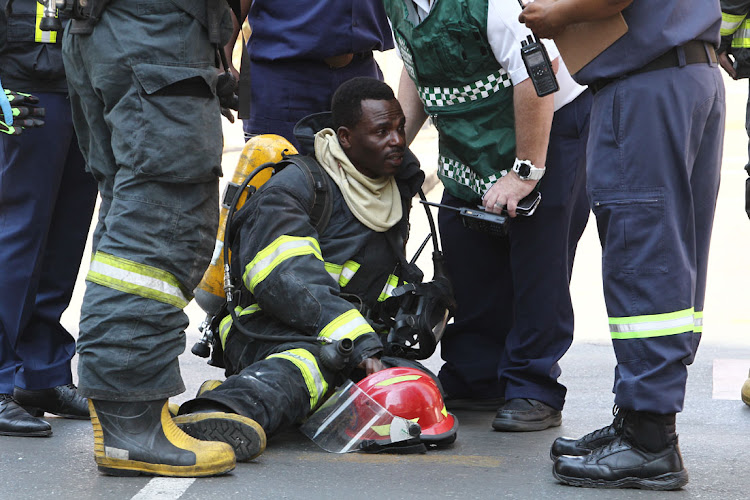 Three firefighters were confirmed dead as they tried to fight a blaze that engulfed the top of a Johannesburg CBD building on September 5, 2018.
Image: Thapelo Morebudi

Gauteng infrastructure MEC Jacob Mamabolo said on Wednesday that the government building that caught alight in the Johannesburg CBD on Wednesday was not up to code.

Three firefighters have been confirmed dead in the blaze‚ with one of the men falling to his death from the 23rd floor. Several other firefighters and civilians are reported to be trapped in or on top of the building‚ leading to fears of further casualties.

According to Mamabolo‚ the provincial government received a report just a week ago‚ on August 27‚ which indicated that eight government-owned buildings were non-compliant. This included the Gauteng health and human settlements building where the fire broke out on Wednesday.

“In the report we have found that the building was not compliant with occupation‚ safety and health standards‚” he said.

The health and human settlements building was 21% compliant‚ and buildings should ideally be above 85% compliant‚ he said.

“It’s very clear to us there is a problem with government buildings in the provincial government‚ so we are not in denial about that point. If we created the impression that we didn’t know‚ that would incorrect.”

The cause of the fire remains unknown.

Officials have confirmed that three firefighters had died in a blaze that engulfed the top of a Johannesburg CBD building on Wednesday.
News
3 years ago

Firefighters are trying to contain a blaze that broke out hours ago at a printing factory in Kya Sands in Johannesburg.
News
3 years ago

SA's on fire and there's no one to put it out

Sophisticated arsonists and a dire lack of firefighting skills are exacting an increasingly deadly toll on SA – and costing the economy billions.
News
3 years ago