‘Mass shutdown’ planned on the Cape Flats in October 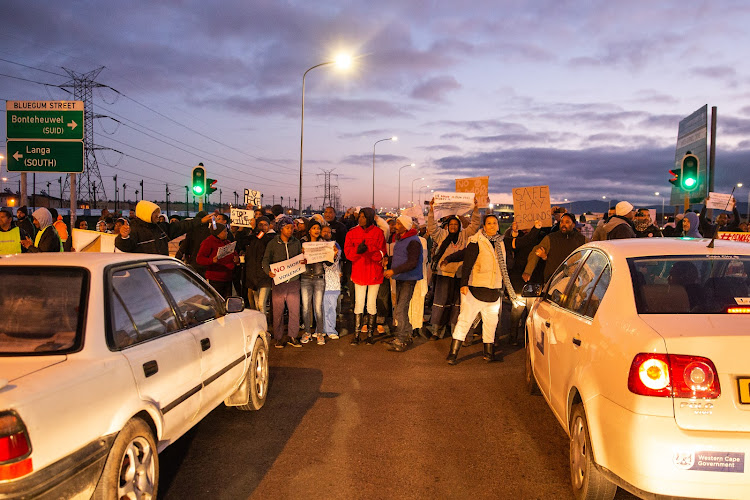 Several communities on the Cape Flats are gearing up for “a mass shutdown” on October 3‚ calling for an end to crime and gang violence.

Organisers told GroundUp that they planned to blockade entrances and some main roads around several areas. The residents then plan to march from Keizersgracht in the city centre to Parliament at 10am.

Meanwhile‚ the Bishop Lavis Action Community plan to blockade all the entrances and main roads around Bishop Lavis on Wednesday morning. Residents say they will hand a memorandum to ward councillor Asa Abrahams and SAPS‚ calling for action to stop gang violence in their community.

Bishop Lavis will be the latest site in a string of sporadic protests in recent weeks. Protests have included Elsies River‚ Kensington and Bonteheuwel.

“I believe gang fights can be stopped. This takes skills development‚ employment and reconstruction of the area. Without those three things‚ you will always have gangs here‚” said Ronald Snipper‚ a gang mediator and member of the Manenberg Safety Forum. He was speaking to a group of mostly activists during a meeting in Manenberg last week.

Over 11‚000 arrests including high-ranking gang members on the Cape Flats; over 3‚000 rounds of ammunition and 130 illegal firearms confiscated; and ...
News
3 years ago

Snipper‚ also known as Uncle Errol‚ is among a handful of peace mediators in Manenberg who have been praised for quelling tensions between rival gangs in the area.

“Policing is only part of the solution‚” he said.

Activist Roegshanda Pascoe said people were tired of being “held hostage” by gangs. She applauded the ongoing #TakeBackOurCommunity campaigns run by residents across the city.

“The march will be pulling together all of our struggles and bringing a united voice to the front. We can’t work in isolation anymore‚” she said.

“We can’t hide behind the fact that police don’t have a plan. It’s also unfair for people to expect the police to tackle social issues. We can’t blame the police for everything‚” she said.

Michael Jacobs from the Mitchells Plain United Residents’ Association criticised the police’s Operation Thunder‚ launched by Police Minister Bheki Cele‚ in May. “Whether or not they make thousands of arrests‚ it certainly is not making an impact in getting the guns and shooters off the streets‚” he said.

#CrimeStats: Most cops killed while off-duty

Most of the police officers who were killed in the last financial year did not die in the line of duty‚ the latest crime statistics revealed on ...
News
3 years ago

At a briefing to the Western Cape legislature’s committee on community safety in August‚ SAPS said Operation Thunder had racked up over 11‚000 arrests including high-ranking gang members on the Cape Flats; over 3‚000 rounds of ammunition and 130 illegal firearms had been confiscated; and there had been a decrease in murder and attempted murder cases in Manenberg‚ Ravensmead‚ Steenberg and Worcester.

But in crime statistics released by SAPS on Tuesday‚ recorded murders across the country rose by nearly 7% from 19‚016 in 2016/17 to 20‚336 in 2017/18. The worst increase was in the Western Cape‚ from 3‚311 to 3‚729‚ nearly 13%. Oddly‚ the statistics show recorded “serious crimes” coming down. Whether this is a consequence of a real drop in crime or increased reluctance to report crime is unclear.

“Our people are living in fear. We need to make the President aware that our people are dying on the streets. We also need to keep the provincial police commissioner accountable for the policing failures within communities‚” Jacobs said.

WATCH | ‘It takes 15 minutes to get your house robbed’

Metro police officer Constable Nikki Horne scopes a quiet street in Rondebosch East in Cape Town through his yellow-tinted glasses as he drives up ...
News
3 years ago

John Cloete from the United Public Safety Front said‚ “There is a groundswell and more people are coming out of their comfort zones and speaking out against the state’s inability to protect us. We must bring the economy to a standstill.”

But not everyone appears to be in favour of the planned mass action. Pastor Wayne Janecke from the Manenberg Ministers Fraternal warned organisers that faith leaders would not openly support the shutdown‚ which he said could turn violent.

“Part of the reason you’ll have the absence of ministers is because our biggest problem is that the conversations happening have a little bit of a militant undertone‚ like bringing the economic sector or city to a standstill. That will make the church withdraw almost immediately‚” he said.

Police have arrested seven suspects following three separate shooting incidents between rival gangs at the River View Flats in Worcester in the ...
News
3 years ago

“We want unity‚ don’t get us wrong. But the church wants to hear words like skills development. Imagine what would happen if pastors encouraged their congregations to participate and it turned sour. People won’t hold the organisers accountable‚ they will look at me as a pastor‚” he said.

Janecke said several buildings in the Manenberg area stood vacant during the week. “This is where skills programmes can be run and educational things can be put in place and where mediation can be done. We should rather engage constructive programmes to change the lives of our people‚” he said.