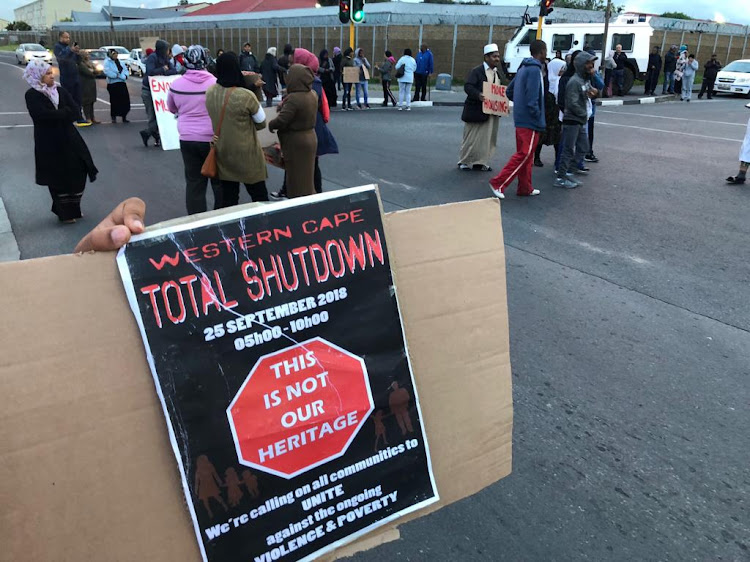 The DA have police minister Bheki Cele a sharp slapdown on Thursday over his meeting with “shutdown” protesters who brought parts of Cape Town to a standstill this week.

The party wheeled out Western Cape premier candidate Alan Winde and future Cape Town mayor Dan Plato on Thursday to brief journalists about a “pitiful” encounter with Cele in Bonteheuwel the previous day.

Cele met protesters and members of the community after Tuesday’s “total shutdown” which aimed to draw attention to crime‚ poverty and other problems in working-class communities on the Cape Flats.

The City of Cape Town mayoral committee member for safety and security‚ JP Smith‚ and Bonteheuwel councillor Angus McKenzie were seated alongside Cele‚ but protesters demanded that they leave and Cele refused to proceed until they did so.

Smith was scathing about Cele on Thursday‚ accusing him of turning crime on the Cape Flats into a political football.

“The DA wishes to condemn the cheap politics that was on display in the Bonteheuwel meeting called by the minister with the organisers of the shutdown protests‚” said Smith.

Working class activists closed numerous roads on the Cape Flats at the start of a “total shutdown” of the city on Tuesday.
News
2 years ago

“A group of persons‚ some with well-known political affiliations and links to the ANC and Cosatu [including Cosatu employees]‚ entered the hall late and then demanded the exclusion of myself and ... McKenzie.

“We had been invited by SAPS‚ on behalf of the national minister. Strangely‚ minister Cele at first denied this‚ and after being confronted with the e-mail acknowledged the invitation. He then asked myself and councillor McKenzie to leave the meeting.”

Smith said this exposed meeting’s political agenda‚ and accused shutdown protesters being unrepresentative of communities‚ “which is why they could only muster 450 protesters”.

He added: “The minister’s failure of political and moral courage does not augur well for a man at the helm of the national police service.”

Smith said Cele and the ANC government should answer as to “why 4‚502 police officers were removed from the Western Cape in the last four years‚ why the national justice system continues to fail to convict gangsters with a pitiful 2% and 3% conviction rate [and] why Cape Town now has 560 people for every one police officer while the rest of South Africa gets to have 369 people for every cop".