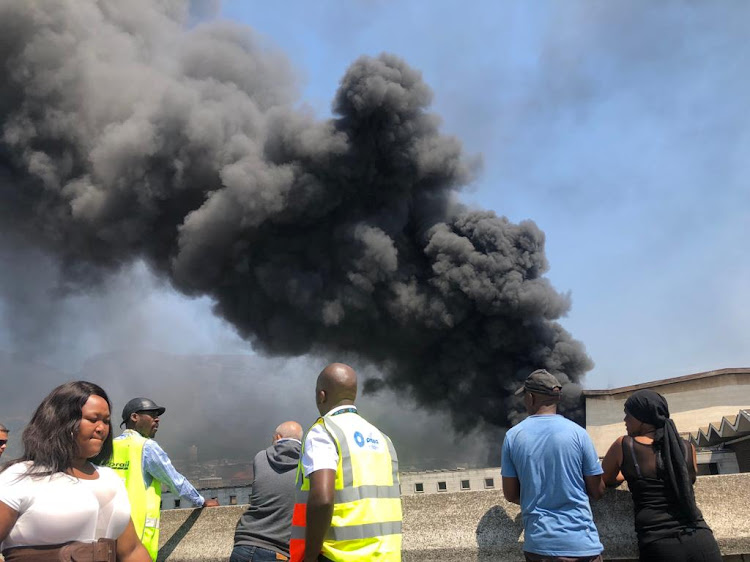 Thick clouds of black smoke poured out of Cape Town train station on Tuesday as two trains burnt fiercely as the Passenger Rail Agency of South Africa (Prasa) briefed parliament nearby about the torching of its trains.

Eyewitnesses near the station posted images on Twitter of the smoke‚ billowing above the station.

The city’s fire and rescue service said it had responded to reports of a train “well alight” at 12:20pm at the station. Fire fighters then discovered two trains were alight.

“There have been reports that the offices above the station deck are also affected‚ but fire fighters on scene are currently investigating. Preliminary investigation (indicates) that the smoke at the offices is from the trains below‚” fire and rescue said in an update.

Four fire engines‚ one water tanker‚ a rescue vehicle and 24 fire fighters are battling the blaze.

The burning of trains has resulted in a huge financial loss for Prasa‚ amounting to R636-million over the last three years‚ Sithole said‚ according to rolling updates supplied by the ANC Parliament Twitter account.

The company plans to expand CCTV monitoring and is liaising with police‚ amongst other measures to combat the criminality.

"We have realised that whenever we visit certain areas‚ like in the Western Cape‚ there’s always a train that gets burnt just before our visit. So we are working with crime intelligence as to why this happens‚" Sithole was quoted as saying.

As the Railway Safety Regulator (RSR) pushes to have Prasa's permit suspended‚ another Metrorail train accident has been reported‚ the RSR said at ...
News
3 years ago

Emergency intervention is required to avoid a nationwide shutdown of all Metrorail operations‚ Cape Town’s transport boss Brett Herron said at the ...
News
3 years ago