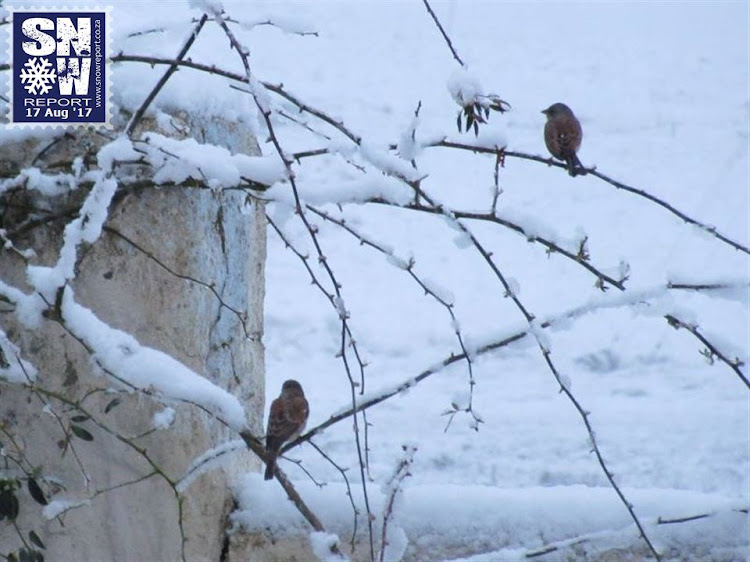 Light snowfall is again expected to blanket the mountains of the Eastern Cape‚ Drakensberg and Lesotho on Friday and Saturday.

Snow Report SA’s latest snowfall map has indicated the possibility of snow for these regions.

“A small weather system will deposit a light snowfall up to 5cm across the mountains around Tiffindell in the Eastern Cape from late tonight‚ including the possibility of [snow] on the Barkly Pass.

"In the early hours of Saturday morning the high peaks on the central Drakensberg and Lesotho will get between 10cm and 20cm of snow."

According to Snow Report SA only the mountain peaks are likely to receive a smattering of snow. “There is a possibility of light snowfalls in cerrtain areas in Lesotho.”

The possibility of heavy rain and hail in KwaZulu-Natal on Friday has prompted the provincial cooperative governance and traditional affairs (Cogta) department to place disaster management teams on stand-by.

This follows a warning from the South African Weather Service to be prepared for severe thunderstorms‚ hail and localised flooding in the western part of the province.

“Our teams are monitoring the situation - especially in low-lying areas that are prone to flooding‚” said Cogta MEC Nomusa Dube-Ncube. She urged motorists to be cautious on the roads and when crossing bridges.

Good news! It's about to get hot again in Mzansi

The cold front experienced across much of the country this week has left South African shores‚ and temperatures are expected to rise from Friday.
News
3 years ago

Sleet‚ snow and biting cold could affect motorists on the N3

Bad weather might affect motorists travelling along the N3 toll route in KwaZulu-Natal.
News
3 years ago

Winter is... back? From hot as hell to the big freeze, SA braces for cold snap

As bizarre as it may be given the soaring temperatures‚ parts of SA are expected to experience a “big freeze” over the next two days.
News
3 years ago