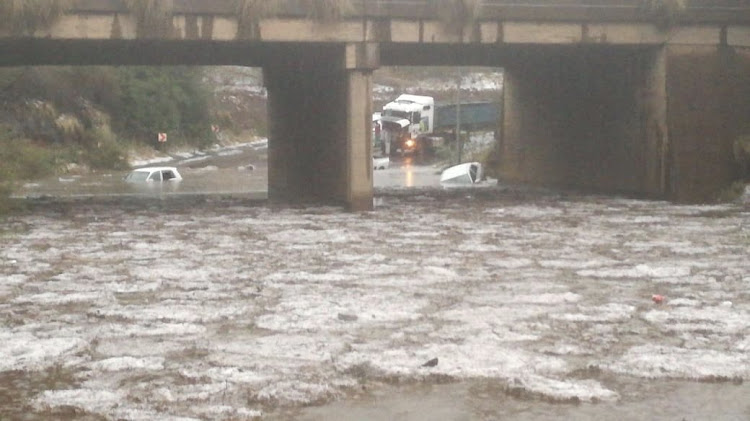 Torrential downpours are occurring across Gauteng on Sunday‚ after a wet Saturday which saw hailstorms reported in various parts of the country.

Cars have been swept away but fortunately no injuries have been reported‚ the service said.

PigSpotter on Twitter reported that amongst the roads affected by flash flooding are the bottom of Barry Hertzog Drive in Johannesburg near the S-bends. “There are six cars parked on the left that had an incident. Keep right when coming down the S-bends from Greenside‚” the service advised.

The nearby Roodeplaat Dam is already overflowing

In addition‚ “severe thunderstorms - with hail‚ strong winds and heavy downpours leading to flash flooding – (have been) observed over Mooi Nooi moving east towards Brits (North-West Province)‚” said the service.

🌊 Flooding in parts of Pretoria West with multiple reports of a number of cars being swept away pic.twitter.com/8B3dWSv8Te

This happened to us in hammanskraal early this morning, around 3-4am. Big or small, no house was spared. No human lives were lost, but a LOT of dogs and chickens died, and I am not gonna even talk about car damages 😥 Please prepare and stay safe, that's all❤️ pic.twitter.com/u32b6ek8xZ