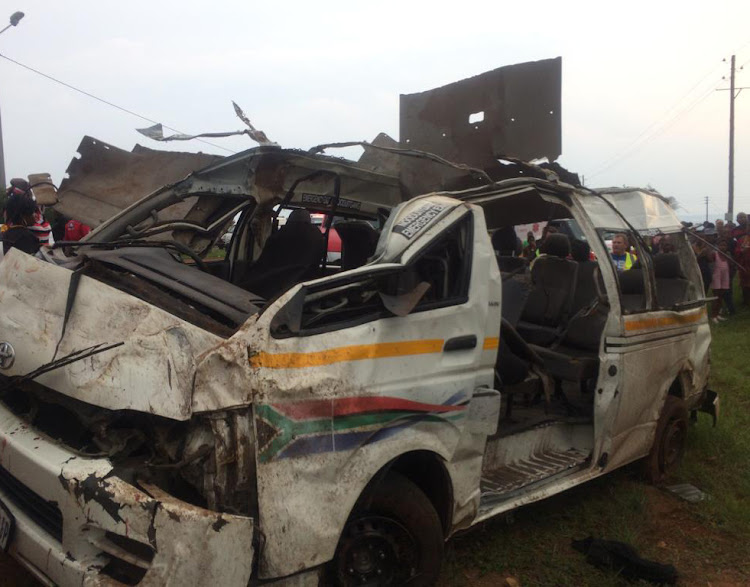 Five people were killed on Saturday evening when a taxi overturned near Westonaria, west of Johannesburg.
Image: Supplied by ER24.

Five people were killed and at least twelve others sustained moderate to serious injuries when a taxi overturned and rolled several times on the R28 in Westonaria, west of Johannesburg, on Saturday evening, paramedics said.

ER24 spokesman Werner Vermaak said that paramedics from ER24 and other services had arrived on the scene shortly before 6pm to find the taxi on the side of the road.

"All of its occupants were ejected from the vehicle. Paramedics found five people with fatal injuries. There was nothing that they could do for them and they were declared dead on the scene. At least 12 other occupants were treated for various injuries.

"The injured occupants were treated on the scene and rushed to nearby hospitals for further medical care," Vermaak said.

"The exact circumstances surrounding the incident are not yet known. Local authorities attended the scene," he added.

A minibus taxi laden with passengers somersaulted several times before crashing into a house north of Durban on Friday.
News
3 years ago

Fifteen people - including eleven children - were injured after a taxi plunged down an embankment south of Durban on Tuesday.
News
3 years ago

Sellina Mokotedi, 25, has become an instant mother to her twin sister's Rachel’s child. Petunia Moila recoils as she recalls her helplessness and ...
News
3 years ago