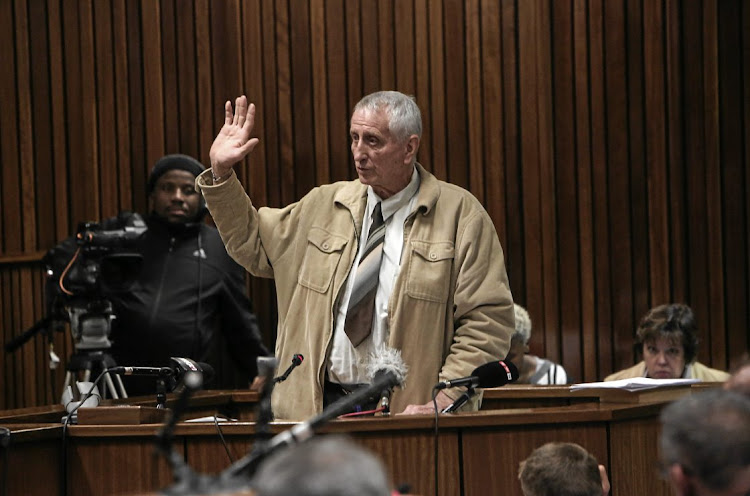 Joao Rodrigues's application for a permanent stay of prosecution will be heard on March 28.
Image: Alaister Russell

Joao Rodrigues, the man accused of being involved in the murder of anti-apartheid activist Ahmed Timol, cannot complain about the delay in his prosecution as the case was only instituted last year.

This was put forward in heads of argument filed by Imtiaz Cajee, Timol’s nephew, as he opposes an application for a permanent stay of prosecution by Rodrigues.

Timol died in 1971 after falling from the 10th floor of the then John Vorster Square police station in Johannesburg, where he had been detained.

While the original inquest in 1972 concluded that Timol committed suicide, the reopened inquest in 2017 found that his death was caused by being pushed. It also recommended that Rodriques be investigated.

Rodrigues was charged in July 2018.

The state's attorneys have received a tongue lashing for failing to appear at the criminal proceedings of João “Jan” Rodrigues, one of the men ...
News
3 years ago

In their heads of argument submitted last Friday, advocates for Rodrigues said the basis for his application for a permanent stay of prosecution was that the prosecution would  infringe on his right to have a trial begin and be concluded without unreasonable delay.

But in a response filed at the Johannesburg high court on Monday, Cajee's legal representative said no complaint of delay, prejudice or violation of fair trial rights could be raised by Rodrigues, given that the criminal proceedings only commenced in June 2018.

“When considering whether section 35(3)(d) of the constitution, which provides that an accused has a right to have his trial begin and conclude without unreasonable delay, has been violated, we submit that the main period to consider is that between the date of indictment and the commencement and conclusion of the trial,” argued Cajee’s advocates, led by Howard Varney, said in their heads of argument.

Varney said a person could not be considered accused before an indictment was served. “Since Rodrigues was only charged on July 30 2018 and the only real interruption in the criminal proceedings has been his application for a permanent stay of prosecution, he cannot complain of a delay in the period post the date of his indictment.”

However, Varney said the long lapse of time between the date of the crime and the charge could not be ignored.

He said the NPA had admitted in affidavits before court that it allowed politicians to dictate its approach to prosecuting apartheid-era crimes. “This shameful violation of constitutional and statutory obligations simply cannot be countenanced. Cajee has called for an inquiry into this political interference and into the fitness of the relevant NPA officials to hold office,” said Varney.

Varney said stopping the prosecution of Rodrigues would amount to a gross perversion of the rule of law, as it would play into the hands of those that sought total impunity for serious crimes, such as murder and torture. “It would signal that unlawful efforts to suppress justice are to be rewarded and it would encourage further such machinations going forward,” he said.

Lawyers for the National Director of Public Prosecutions (NDPP) and the minister of police are also opposing Rodrigues's application.

They said Rodrigues's own sense of justice must dictate that there was a need to bring the matter to an end - for him and Timol's family - and that a permanent stay of prosecution was not going to bring that closure.

"The applicant himself [Rodrigues] can only clear his name through a trial and not by a stay of prosecution," their advocates Kennedy Tsatsawane and Tiny Seboko said in the heads of argument submitted on Monday.

The application for a permanent stay of prosecution will be heard on March 28.

The Timol family was on Wednesday admitted as an intervening party in the application by Joao Rodrigues, the former policeman implicated in the death ...
News
3 years ago

Former apartheid-era policeman Joao Rodrigues is planning to plead not guilty to a charge of murdering activist Ahmed Timol in 1971.
News
4 years ago

President Cyril Ramaphosa has been urged to appoint a commission of inquiry into “political interference” that scuppered the prosecution of ...
News
3 years ago