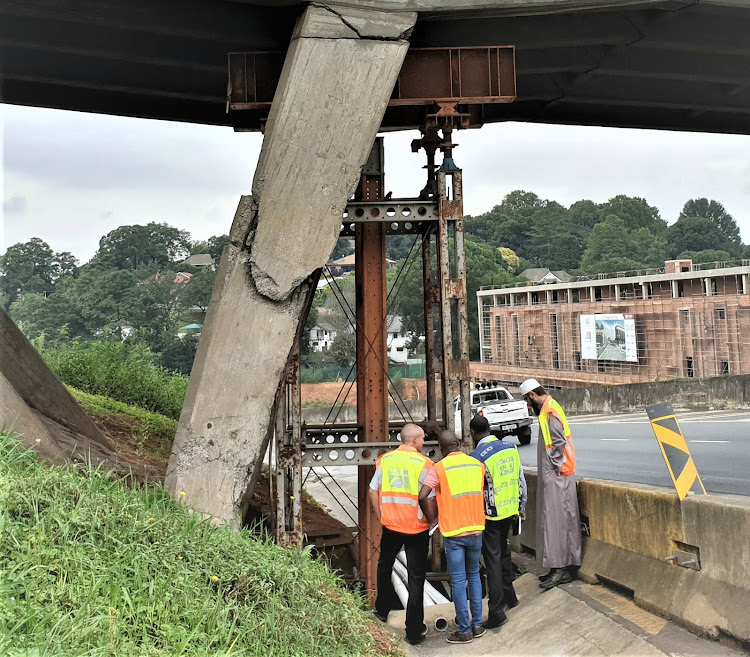 Engineers from the SA National Roads Agency have declared the damaged bridge over the N3 safe
Image: Sanral

A damaged bridge across the busy N3 near Pietermaritzburg - that is being supported by temporary steel frames - has been declared safe by engineers.

Motorists travelling between the KwaZulu-Natal capital and Durban have raised concerns about the Peter Brown bridge, mainly on social media platforms.

On Friday the South African National Roads Agency (Sanral) said in a statement that the bridge - which was damaged after a truck crashed into it in 2016 - was "considered safe for use by normal vehicles".

However abnormal vehicles, carrying heavy loads, were barred from using the bridge.

"The safe load restriction for the surrounding roads is 20 tonnes and therefore the same weight limitation has been placed for the bridge."

Parak said the structure has been inspected regularly by Sanral engineers and "any areas of concern are attended to as quickly as possible".

Sanral estimated that the cost of upgrading the bridge was between R3m to R5m.

The agency said it had encountered a delay in finalising the construction tender to "ensure maximum participation of black SMMEs..."

Nine out of 10 Joburg bridges are in bad condition and there’s no money to fix them.
News
3 years ago

While part of the M2 motorway in Johannesburg will be closed to repair its unstable bridges, scores of homeless people living there in squalid ...
News
2 years ago