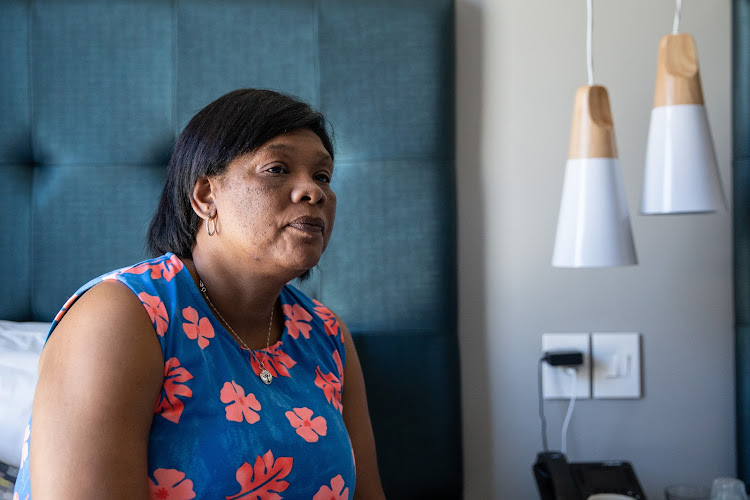 Roegshanda Pascoe, a Manenberg resident and activist who risked her own safety to testify in a Cape Flats murder trial.
Image: Ashraf Hendricks / GroundUp

Roegshanda Pascoe can still hear the sound of her grandchildren "screaming and crying" on the night of March 6, when unknown gunmen opened fire on her Percos Walk, Manenberg, house.

Pascoe, an activist in the area, was speaking from a place of safety last week, recalling that night. She believes the men had come for her, but she had been moved to a safe house earlier that day.

Her children and young grandchildren, however, were at home.

Her son-in-law called her after the incident and she heard her children crying in the background.

Her children, three grandchildren, including a two-month-old baby, and her son-in-law have since joined her at the safe house.

The reason for the attack seemed to emanate from an incident nearly three years ago. On July 20 2016, Pascoe and her grandson, aged three at the time, were among more than a dozen community members who watched helplessly as Angelo Davids was brutally assaulted, allegedly by members of a rival gang, just a few metres from Pacoe's house.

The City of Cape Town is considering closing Manenberg swimming pool after a staff member was attacked by intruders.
News
2 years ago

Davids died in hospital hours later. Six men, alleged to be members of the Clever Kidz gang, are currently on trial in the Western Cape High Court for the murder.

"I was very sick for a few months after seeing this. I had to go for trauma counselling and it took time for me to find stability again," she said.

But when none of the other witnesses came forward, Pascoe made the decision to avail herself to the state. She would stand as witness to the murder of Davids.

"I was well aware of the dangerous implications that come with this … Our security departments claim they serve the people and our expectation is that they'll be there to protect us," she said.

At the time of the incident, Manenberg was one of the country’s most notorious hotspots for gang violence. Scores of innocent bystanders had been caught in crossfire between rival gangs.

Pascoe had refused an offer of witness protection because the National Prosecuting Authority (NPA) wanted to relocate her entire family to another province. She is now  being helped by the organisation she works with.

"Two weeks before the [March 6] shooting, I was getting threats and was warned that there was a price on my head. I notified police and people thought I was being dramatic and looking for media attention. But when gangsters make a threat, they mean it," she said.

The Cape Flats community of Bishop Lavis blockaded all roads into the suburb on Wednesday in a protest against gang violence.
News
2 years ago

Pascoe said that the day before she was to take the stand, the organisation she works with – the Global Initiative Against Transnational Organised Crime – took her somewhere safe.

Just after midnight that day, Pascoe got the call from her son-in-law saying that gunmen had opened fire on their home. The house was riddled with bullets. Luckily, no one was injured.

Her family has had to uproot their lives and abandon their home of many years. Her son and son-in-law have been unable to work. Her youngest daughter, aged 15, and grandson, who is six, have missed weeks of school.

"Now they will have to adjust to a new area, new school and a place where we don’t know anyone. That's just the children. What about us with jobs? Our whole lives are here [in Manenberg]," said Pascoe.

She said the NPA's offer to relocate them would leave her family to "find their own feet", with very little to no financial support.

"It’s not easy to start fresh somewhere new without financial assistance," she said.

Friends and colleagues have donated food for the family, but this is not a long-term solution, she said.

Disgraced former police detective Alicia Beeming hung her head in apparent shame after she was sentenced to four years in prison for defeating the ...
News
2 years ago

Pascoe, who has been in the witness box since Monday, said she has been urged never to return to her home in Manenberg.

"I’m not just stepping into the court for this [specific] case. I’m doing it for all the blood of innocent people that was shed on the streets of the Cape Flats … [Davids] was assaulted in front of a whole community, but we are the only ones paying the price. But I understand now why people don’t speak up," she said.

"The government keeps on saying that communities don't want to speak up, but look what happens when you do. You can't blame people for not wanting to put their lives at risk," she added.

Pascoe said while witness protection was the responsibility of the NPA, the provincial and local governments should not be absolved from helping witnesses in need.

SAPS had not responded to GroundUp by the time of publication.

NPA spokesman Eric Ntabazalila said they could not release recent "sensitive information" about the witness programme.

Gangsters who terrorised Gauteng and Mpumalanga jailed for 914 years

The Johannesburg high court sentenced a gang who “terrorised Mpumalanga and Gauteng between 2013 and 2014” to life imprisonment on Thursday for ...
News
2 years ago

According to the National Director of Public Prosecutions' 2017/2018 annual report, the NPA's programme was "one of the best in the world".

The report said that during the year in review, there were no records of witnesses being harmed or killed in the programme. Only 10 out of the 722 people in witness protection chose to leave.

The report said 48 accused were convicted as a result of witness testimonies last year.

"It costs an average of R18,345 a month to protect a witness and related people," the report said. It added that "due to budget constraints" it was unable to improve its aftercare process, which included reintegrating witnesses after they had testified. The report said only 29 witnesses had to return to "danger areas".

Western Cape community safety MEC Alan Winde said that his department's hands were tied when it came to helping witnesses like Pascoe and her family.

"We unfortunately do not have a mandate over the NPA," he said.

Meanwhile, seated on the edge of a bed in a small room, Pascoe became tearful as she said: "I feel guilty because my children didn’t ask for this. They are traumatised. People assume that I have it all together, but it's hard. A few weeks ago my mother left R20 for me and said it was the only money she had, but she wanted me to buy myself something nice. I just think of how worried she must be now."

Pascoe hopes to eventually continue her advocacy work, but said her priority for the next few weeks was to secure the safety and survival of her family.

A police chase ended with the suspect dying when he allegedly stopped to open fire on officers, resulting in one of them firing a fatal bullet, ...
News
2 years ago

Children are known for dodging and ducking skipping ropes on the streets, but in Cape Town’s Bokmakierie suburb they dodge and duck bullets.
News
2 years ago

Fabian Adams's short life was one of almost inescapable tragedy, and a week before Christmas it ended in the same way.
News
2 years ago

Two suspects arrested for two murders in Westbury, Johannesburg, which police believe might have been gang-related, will appear in the Johannesburg ...
News
2 years ago
Next Article