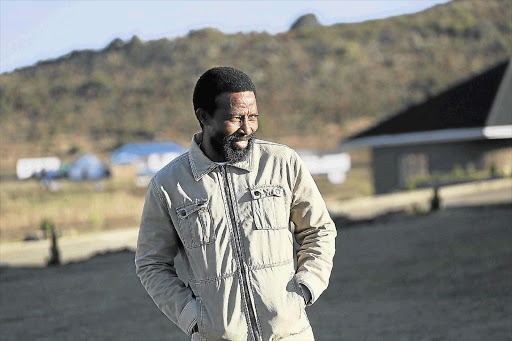 King Buyelekhaya Dalindyebo is serving an effective 12-year prison term for arson, assault with intent to do grievous bodily harm, defeating the ends of justice and kidnapping.
Image: ALON SKUY

Dalindyebo is serving an effective 12-year prison term imposed by the Supreme Court of Appeal in October 2015. The jail time was handed down for three counts of arson, three counts of assault with intent to do grievous bodily harm, one count of defeating the ends of justice and one count of kidnapping.

The king set fire to dwellings that housed three complainants - who were his "subjects"  and tenants - to secure their eviction when he believed they had breached tribal rules.

Contralesa has issued a warning to the governing party, saying the ANC-led government must fulfil promises it made to them or face being rejected by ...
Politics
3 years ago

The king was also alleged to have publicly assaulted three young men so brutally that, had it not been for later medical intervention, they might very well have died.

The justice ministry said on Thursday the initial application for Dalindyebo's pardon was made by the Congress of Traditional Leaders of SA (Contralesa) in January 2016.

The department said the king afterwards made his own application for a pardon.

"In terms of the process, the application was submitted to the department of justice and constitutional development for processing, and to minister Michael Masutha to make a recommendation to the president whether to grant a pardon or not," ministry spokesperson Max Mpunzana said.

Do you have good cause? Cyril Ramaphosa on #FeesMustFall amnesty request

A blanket amnesty cannot be granted by President Cyril Ramaphosa but government will consider a properly motivated application for pardons for ...
News
3 years ago

Mpunzana said Masutha sought the advice of external legal counsel on the application by the king, including facilitation of interaction with the victims who expressed their views.

"One of the considerations in a pardon application is the views of the victims of the crime.

"For that reason, counsel also engaged with the king in respect of facilitating victim offender engagement in line with our restorative justice approach.  The views of the victims were factored in when the minister made his recommendations to the president," Mpunzana said.

He said there was no specific timelines prescribed in law for when Ramaphosa may make his decision.

In SA, Section 84 (2) (j) of the constitution confers on the president the power to pardon or reprieve offenders and remit any fines, penalties or forfeitures.

How is chieftaincy practised in contemporary South Africa?

This book explores how those living under the authority of chiefs, in a modern democracy, negotiate or resist these politics in their respective areas
Books
3 years ago

A dispute over a cultural village being built for Zulu king Goodwill Zwelithini at his Enyokeni palace in Nongoma, which was halted after forensic ...
News
3 years ago