WATCH | Newtown shooting: 'They made sure he was dead' - security guard

"They shot him from the back and shot him multiple times. They made sure he was dead."

These were the words of a security guard outside the offices in Newtown where a man, believed to be an engineer, was gunned down on Tuesday.

The 47-year-old man's name has not officially been released, but it is believed that he was the owner of B2B Consultants on Quinn Street, Newtown.

On the company's website it states: "We provide diverse engineering and project management services ranging from conceptual studies to operation and maintenance of assets, facilities and information.

"The company delivers full civil, mechanical, electrical and control and instrumentation consulting engineering services in its areas of focus."

A security guard at the offices, who asked not to be named, told TimesLIVE on Wednesday that the man had parked his car and took his bag out of the boot.

"He greeted one of my guys [security officers] and walked to the entrance of the building. A guy came out from the blind spot and shot him from the back."

The guard said multiple shots went off before the man ran around the corner, got into a car and fled.

"Everything happened very quickly. It was like lightning. This guy is a big thing here, so it must be a hit." 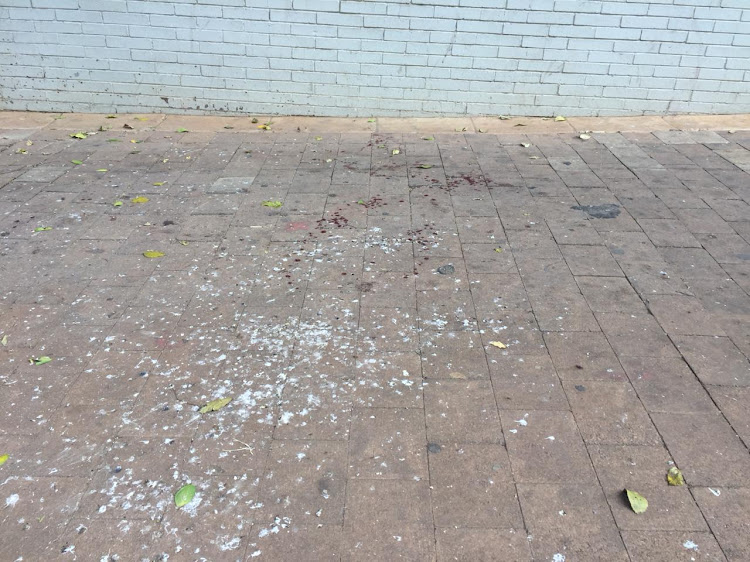 The pavement outside offices in Newtown still show bloodstains where a man was gunned down on Tuesday morning.
Image: Iavan Pijoos

Blood spatters are still evident where the man's lifeless body lay on the pavement metres away from his car.

Phones rang unanswered and no one from B2B seemed to be at work on Wednesday.

A graphic video of the shooting has gone viral on social media. In the video, the murdered man is seen waving his hand to greet someone on the other side of the road after taking his bag from the boot.

A hooded man is seen jogging from behind. He takes out a gun and fires multiple shots as the man falls to the ground. The attacker stands over the man and fires more shots before fleeing the scene.

The man's lifeless body is left for dead.

Cpt Mavela Masondo said a murder case had been opened. No arrests had been made.

"We are still searching for the suspects. We can't confirm or deny that it was a hit, it will form part of our investigation."

A 47-year-old man was shot and killed outside a business in Newtown, Johannesburg on Tuesday morning, paramedics said.
News
2 years ago

Man gunned down in downtown Joburg believed to be a lawyer

Johannesburg police are investigating a case of murder after a man, believed to be a lawyer, was shot dead outside a law firm in the city’s central ...
News
2 years ago