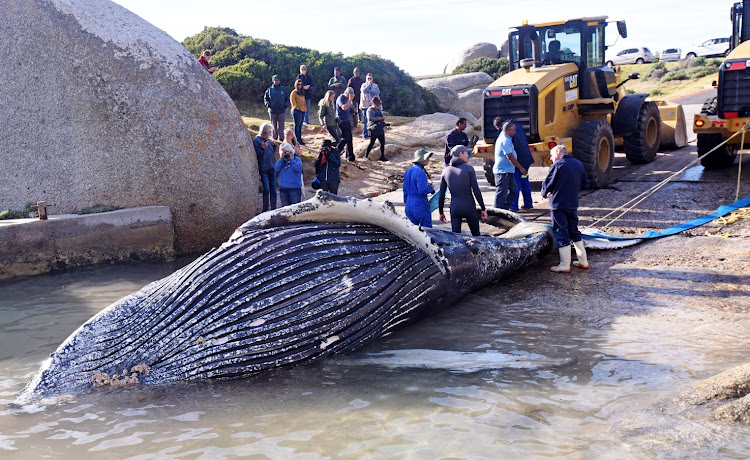 A carcass of a young humpback whale killed during octopus fishing in False Bay is retrieved on June 27, 2019.
Image: Gallo Images/Brenton Geach

The City of Cape Town has called for a moratorium on octopus fishing after a second whale death in False Bay.

The council said at least three whales had been entangled and two had died in the past two weeks as a result of octopus fishing.

On Wednesday evening, city officials were told the carcass of a young humpback whale was floating about 500m off Sunny Cove, in Fish Hoek. They discovered the whale had drowned after getting tangled in an octopus fishery line.

"I am very worried about the impact this is having on our marine life and ecosystem, and the ethics of the octopus fishing practice in general," said Marian Nieuwoudt, the mayoral committee member for the environment.

"I thus request the new [fisheries] minister Barbara Creecy to place a moratorium on this permit and that all fishing gear be removed from False Bay until such time as the fishing gear and equipment are redesigned, tested, and proven not to pose a threat to our marine life.

"We are aware that livelihoods and jobs depend on the octopus fishing industry. However, we have to insist on sustainable practices. We cannot allow a situation where whales continue to die because of these nets." 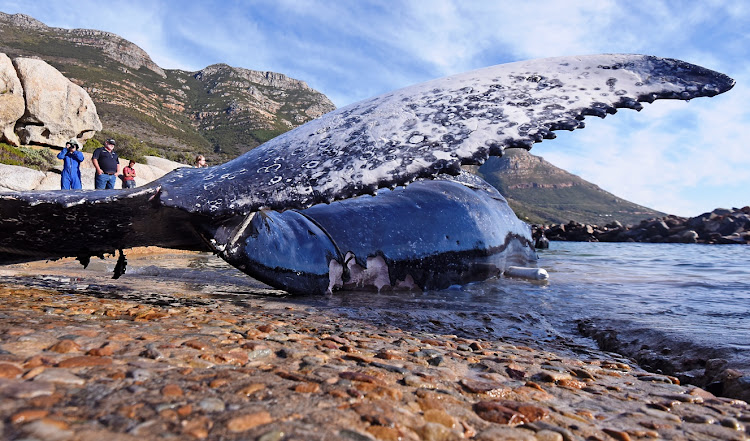 Two weeks ago, a 10m whale died in False Bay when it was hit by a ship's propeller.  A Bryde's whale subsequently died off Miller's Point, near Simon's Town, when it became entangled in an octopus trap line.

Nieuwoudt said Cape Town would ask Creecy to consider providing the octopus fishing permit holders with an alternative catch to "ensure that those employed by the fishery will still be able to earn a living".

She said the removal of whale carcasses had placed such a huge financial burden on the city’s coffers that it was thinking of charging the fishing companies involved in octopus fishing or the national government.

"The cost to remove and dispose of one whale carcass amounts to between R50,000 and R150,000, depending on the weather conditions and the location of the carcass. We cannot expect ratepayers to keep on subsidising the bycatch of whales," she said.

Drone footage of sharks feeding on a whale carcass off the coast of Newcastle, Australia, on December 6 2018 is something to behold.
News
2 years ago

The carcass of a large whale was towed out of a busy shipping lane in Table Bay on Wednesday after an apparent collision with a vessel – the second ...
News
2 years ago

A humpback whale carcass has washed up close to Cape Town’s harbour, but at 10m long, it has proved difficult for officials to remove.
News
2 years ago

Five fishermen were forced to abandon their boat after they struck a whale near Lambert's Bay, in the Western Cape on Tuesday.
News
2 years ago