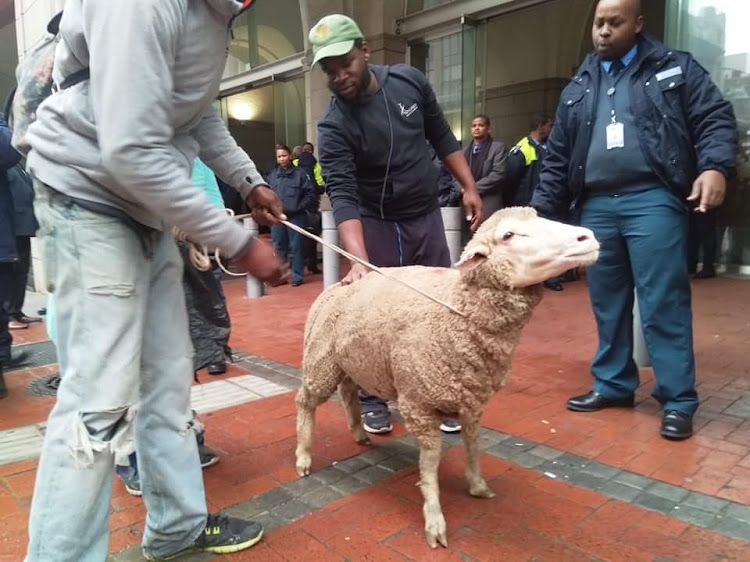 A sheep was dragged around Cape Town in protest against the city's 'harassment' of homeless people.
Image: Facebook/Nangamso Swazi

A small group of protesters dragged a sheep to the provincial legislature on Thursday to protest against the fining of homeless people in Cape Town.

In a number of videos circulating on social media, the sheep can be seen placed outside the legislature as the state of the province address (Sopa) was taking place inside.

The group's intention was to slaughter the sheep, but police dispersed the gathering and the Society for the Prevention of Cruelty to Animals (SPCA) stepped in to eventually confiscate the animal.

The demonstration was purportedly led by members of the Black People's National Crisis Committee (BPNCC).

In another video, a small group is seen chanting songs and carrying a placard that reads: "We stand with the homeless."

[UPDATE] We are being followed and stopped by police because they want to involve the SPCA because we are treating the sheep in an "inhumane manner". We ask, is it not inhumane for homeless people to be violated and ill-treated. #NelsonMandelaDay #WeStandWithTheHomeless pic.twitter.com/8sUoU8Phu0

"We have the sheep obviously but it's in the boot of the car. We are not walking with it on the street, but there is a large contingency of police officers, traffic officers. We've been followed everywhere we are going," a person shooting the video is heard saying.

"We are being followed and stopped by police because they want to involve the SPCA because we are treating the sheep in an 'inhumane manner'. We ask, is it not inhumane for homeless people to be violated and ill-treated," said Zimasa Mfenyana on Twitter.

Sheep's been carried into a car's boot and taken for a "tour around the CBD." Meanwhile premier Alan Winde continues with his #WCSOPA2019 inside the legislature @Sonkoerant pic.twitter.com/DUJpFcBKU9

Authorities in the city have been criticised for "harassing" people living on the streets but the city said it was merely enforcing bylaws.

In a statement on July 2, the city said that in the first three months of 2019 it had received about 3,051 complaints from the public about anti-social behaviour by people on the streets. It had issued about 199 fines for the contravention of bylaws.

There are more than 6,000 people living on the streets and in shelters in Cape Town – most of them men.
News
2 years ago

Police have told parliament that they did not act to prevent the controversial slaughtering of a sheep at Clifton Fourth Beach because they were not ...
News
3 years ago