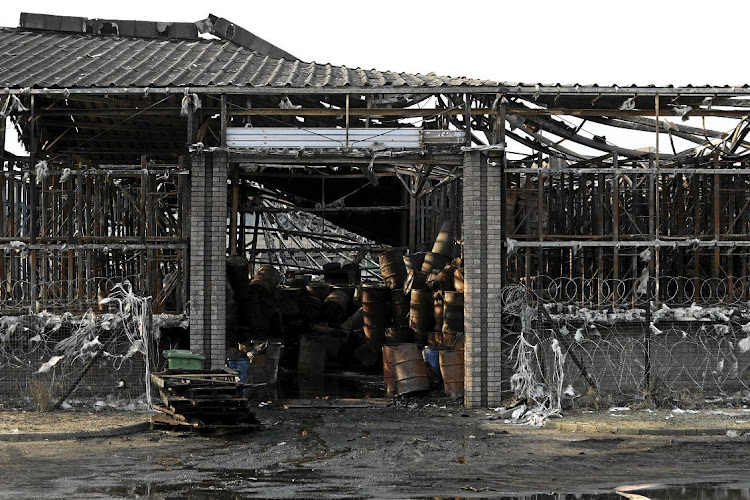 The burnt-out ruins of the warehouse in Cato Ridge that was used to store toxic mercury waste.
Image: Sandile Ndlovu

The eThekwini municipality has issued a warning not to drink water directly from the Umngcwini stream, in the west of the municipality, after a chemical fire about 10 days ago.

The city said that water samples from the area "indicated elevated levels of mercury".

This comes after a massive blaze last Sunday at the Metallica Chemicals factory in the Cato Ridge area.

"Members of the public are also cautioned against allowing livestock to drink from the water or from irrigating crops using water from the stream until further notice," the city said.

The Sunday Times reported this week that the factory had stored 3,000 tons of mercury waste for more than 20 years.

A mysterious fire at the plant on Sunday August 25 destroyed about 30% of the waste stockpile, potentially causing toxic air pollution.

Metallica Chemicals is affiliated to British company Thor Chemicals, which was processing mercury in the UK until airborne pollution concerns forced it to stop in the 1970s.

A leading environmental activist believes the fire last Sunday at a chemical plant in KwaZulu-Natal is part of a smoke-and-mirrors campaign over a ...
News
1 year ago

Scores of dead fish lined the banks of the Umhlanga River, north of Durban, following a major sewage spill on Thursday.
News
1 year ago

Farmer Dennis Mncwabe should have already started planting the vegetables that feed his family and more than 100 residents of Sobantu, on the ...
News
1 year ago