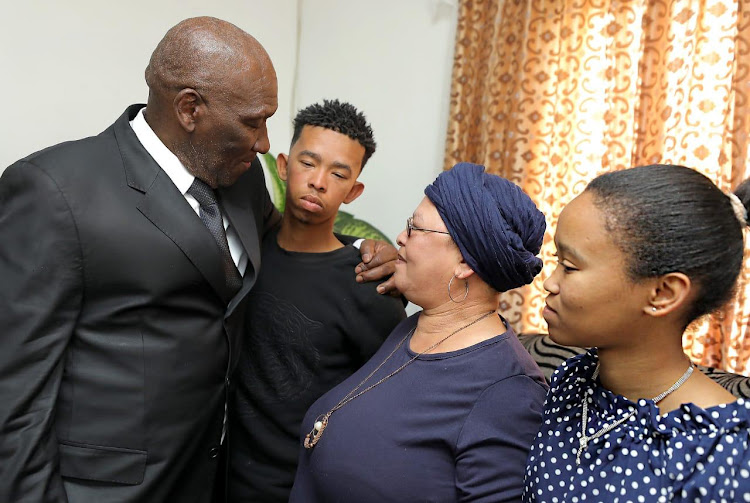 A man wanted in connection with a double murder has appeared in court for allegedly killing a Cape Town policeman.

Shane Swart, 20, allegedly hid in the toilets at an Mfuleni tavern when two officers arrived to arrest him on Sunday, said Hawks spokesperson Capt Philani Nkwalase.

#PoliceMinistry General #BhekiCele visited the family of Warrant Officer Hilton Joseph today to pay his heartfelt condolences. The officer was killed on Sunday in Mfuleni in the Western Cape while on duty with his partner Const Terrence Mostert. #PoliceKillings ML pic.twitter.com/Ln7XPQSkNc

“The suspect managed to get away following an exchange of gunfire with the police,” he said, but Swart was among three suspects arrested later by a team of officers from the Hawks, the anti-gang unit and Mfuleni police.

He appeared in the Blue Downs magistrate’s court on Thursday on murder and attempted murder charges related to the incident at Sharp Shooters, said Nkwalase.

The men who were arrested with him were cleared of suspicion and released.

“The Hawks’ national bureau for illegal firearms control and priority violent crime has been tasked to further investigate the police murder,” said Nkwalase.

“The case against Swart was remanded to December 4 for further investigation, as he abandoned his bail application.”

#CrimeStats: Police murders down, most cops are killed while off duty

In KwaZulu-Natal, 15 off-duty officers were killed, followed by Gauteng with 9 and Western Cape with 8.
News
2 years ago

Two suspects have been arrested in connection with a shooting in Cape Town which left one police officer dead and another severely wounded.
News
2 years ago

Emotional scenes as 27 slain police officers are honoured in Pretoria

The mood was sombre at the Union building in Pretoria, where 27 police officers who were killed in line of duty in the last financial year, were ...
News
2 years ago