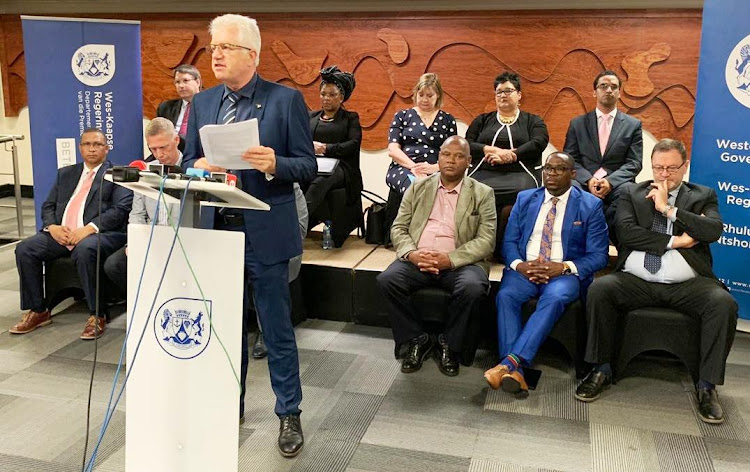 Western Cape premier Alan Winde announced “the most comprehensive and most expensive” safety plan in the province's history, with 3,000 new law enforcement and metro police officers.

The R1bn-a-year project will include an early childhood development plan for 10,000 at-risk youngsters which will support them and their caregivers from “conception to two years old”.

Unveiling the plan on Thursday during an event at Cape Town Stadium, Winde said every member of his provincial cabinet would have a safety responsibility.

They would be responsible, among other things, for addressing spatial design and environmental conditions which were factors contributing to violent crime.

The defence force will stay in crime-hit parts of Cape Town for another six months.
News
2 years ago

Winde said: “This safety plan includes both a law enforcement and a violence-prevention component. This is because we know that boots on the ground are not enough. Violence starts at home and in our communities.”

Winde used the stadium to depict the 3,000 new officers by demarcating that number of empty seats.

The City of Cape Town has 1,200 safety officers, including law enforcement and metro police. The new officers and investigators will more than triple that figure, although the officers will not be confined to the city.

Winde said Cape Town would recruit and train the new officers, the first 1,000 of whom would be deployed by the end of the year.

The Western Cape’s murder rate increased by 14% during the army’s two-month deployment on the Cape Flats, which is due to end tomorrow.
News
2 years ago

“I have decided in collaboration with my cabinet and our partners at the city to do everything possible through the use of technology and evidence to arrest violent crime where and when it happens, but also - just as importantly - to address the drivers of crime and violence,” he said.

“The actions we have outlined will build the collective resilience of our households and communities to crime and trauma.

“This is my plan as it stands today. I will not shy away from amending or changing what does not work or trying out new ideas or approaches.

“One thing I will not change is my steadfast determination to rid our province of this scourge, and I call on our people to hold me accountable to that, not just towards the general concept but to each and every one of the specific delivery metrics that we will announce for every one of the interventions I have outlined today.”

It took her four days and five attempts to report the rape of her three-year-old daughter to the police. When officers finally arrived at her home, ...
News
2 years ago

So dire is the manpower and resource shortage at the rural northern KwaZulu-Natal police station of eMondlo that the community has formed vigilante ...
News
2 years ago

You don’t have to be chicken to live in Worcester’s Kuiken Street, but it helps you to survive.
News
2 years ago