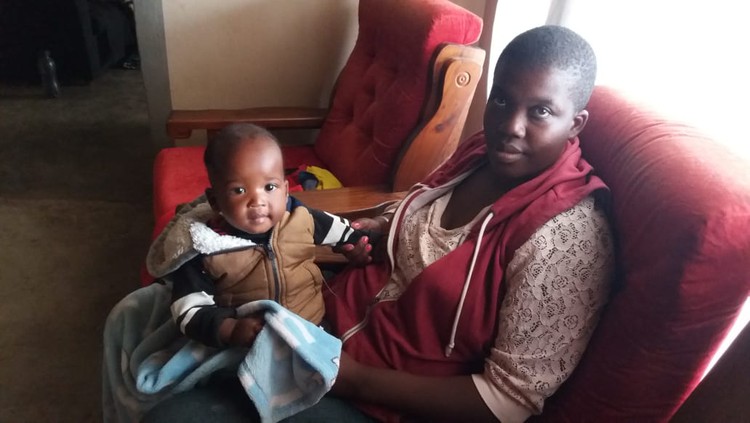 When Lucky Moepja started feeling labour pains on Saturday, October 6 2018, she was taken to Philadelphia provincial hospital in Dennilton, about 120km north-east of Pretoria.

Moepja, 26, travelled from Ntwane village, about 25 minutes away. When she got to hospital, she was in pain, bleeding and ready to give birth.

According to Moepja, she cried for help, but her pleas were unanswered. The nurses at the hospital told her to close herself with a towel because she was bleeding. She was then left alone unattended.

“I was in pain and bleeding and I shouted for help telling the nurses that the baby is about to be born. The pain was too much. A nurse told me I had a multiple pregnancy.”

Shortly after that her water broke.

“One nurse ordered me to stand up and follow her. My baby came out while I was in the hospital passage following her. He fell on his head between my legs on the hospital floor. I could see the umbilical cord attached to my baby boy, Homotsegang, dangling,” said Moepja.

“The nurse shouted at me and told me to sit down on the floor. She asked me ‘What are you thinking?’ and said ‘Look now what are you doing!’”

Civil rights movement #NotInMyName on Wednesday said the Zimbabwean woman who was forced to give birth standing up was allegedly told by medical ...
News
2 years ago

“They examined my child and certified him dead,” said Moepja.

“Another nurse told me to follow her to another consulting room. A doctor came some hours later and examined me and assisted me to give natural birth to baby Keabetswe.”

“My dead child was buried by my parents while I was in hospital, two days after giving birth. The hospital discharged me four days after I gave birth. When I think of the hospital my heart bleeds with the bad memories of the horror I endured,” she said.

Moepja said was told at her local clinic that she had a high risk pregnancy. She was referred to the hospital. She said, she never missed a single maternity appointment until her day of delivery.

Neil Shikwambana, spokesperson for the Limpopo health department, said that a social work team was provided to the family for debriefing and psychological support.

“An investigation revealed that there was poor monitoring and supervision of the patient by the nursing staff,” said Shikwambana. “The two nursing staff implicated were charged with misconduct.”

The hearing was held in May and a report of the outcomes presented to Moepja in August.

One of the two nurses was a community service nurse, who has left the public service. The other one was given a written warning.

Shikwambana said that while the incident was “truly unacceptable”, the investigation found that the baby had died before delivery.

It’s a finding that Moepja doesn’t accept. “I am left with no option but to take legal action against the department,” she said. She wants compensation “to remedy the situation”.

Casualty at Africa's biggest hospital treats enough people a year to fill the FNB stadium to capacity.
News
2 years ago

Johannesburg’s Charlotte Maxeke hospital had to reschedule non emergency surgeries last week due to shortages of supplies.
News
2 years ago

Denosa has threatened to withdraw its members from Pholosong Hospital in Tsakane after a nurse was attacked by a patient on Wednesday.
News
2 years ago