A man caught in a property in Witbank has died after allegedly being beaten by the homeowner and his neighbours.
Image: 123RF/Paul Fleet

Mob justice that unfolded on the suburban streets of Reyno Ridge in Witbank, Mpumalanga, led to the death of an alleged intruder.

The man was reportedly caught inside a property by the homeowner early on Tuesday.

“The man walked towards the back of the yard where the owner’s vehicle was parked. The 49-year-old owner caught the suspect in the yard and started assaulting him severely. The owner’s wife phoned nearby neighbours who also arrived at the house and joined in assaulting the victim,” said a statement from police spokesperson Capt Eddie Hall.

Maureen Scheepers, operations co-ordinator of the local SA Community Crime Watch group, on Wednesday said they received a call around 10.20am, minutes after the assault began.

“When we got there, he was naked. He was still tied up. They had beaten him with a spade, sjambok, sticks and a hose pipe. They kept pouring water on him where his flesh was exposed,” said Scheepers, adding that there were about eight people involved in the beating. 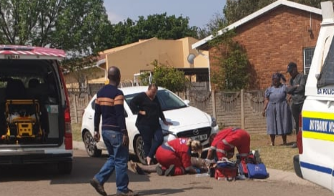 Paramedics attend to the man who was beaten, allegedly by a homeowner and his neighbours after he was caught in a yard.
Image: Supplied

“He looked at me and said ‘jy is so mooi’. I was still talking to him when his face turned pale. He then had convulsions and his eyes rolled back and that is how he died,” Scheepers said.

The man was declared dead by paramedics about 2pm.

Scheepers, who attends to crime calls daily, told TimesLIVE that she was still distraught.

“At least once a week we will get calls that the homeowner has caught [an intruder] and assaulted them. We really attend to a lot of these cases,” she said. But very seldom do they result in a fatality, she added.

The 49-year-old homeowner was arrested on the scene.

“The involvement of the suspect’s wife and other neighbours … is still being investigated, and could lead to more arrests,” said Hall.

Scheepers said the crowd was angered by the arrest, arguing that the alleged intruder could have done more than carry out a petty crime.

A murder case has been opened.

Police called for the community to refrain from taking the law into their own hands and urged for them to rather work with the police.

An Alexandra man was attacked and hacked by a "mob" at his two-bedroom duplex, situated in a narrow street in the Johannesburg township, on Saturday.
News
2 years ago

Seven KwaZulu-Natal men have been arrested for the murder of a man whom they accused of stealing.
News
2 years ago