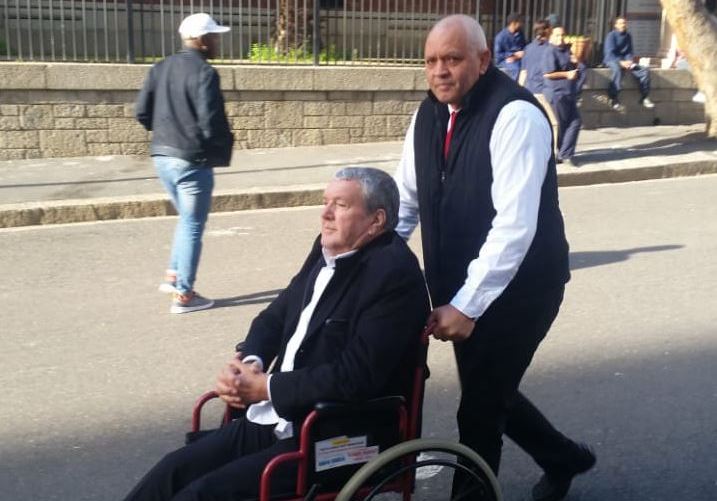 Guus Kouwenhoven in a wheelchair outside the Cape Town magistrate's court in June 2018. The Southern African Litigation Centre has filed an application to ensure Kouwenhoven cannot retain his immigration status in South Africa, and sought to facilitate the withdrawal of his visa and departure from the country.
Image: Dan Meyer

Kouwenhoven, a 77-year-old Dutch national, has been resident in South Africa since December 2016 when he fled the Netherlands.

The centre said Kouwenhoven was convicted of arms trafficking in Liberia during the presidency of Charles Taylor.

In April 2017, Kouwenhoven was convicted by the Court of Appeal in Den Bosch, the Netherlands, of co-perpetrating the illegal supply of weapons to the regime of Taylor between 2001 to 2003, and of participating in war crimes committed by Liberian forces during 2000 to 2002.

He was sentenced to 19 years imprisonment.

The Dutch authorities then sought, from South African authorities, a warrant for his arrest, and he was arrested at his home in Bantry Bay, Cape Town,  on December 8, 2017.

The centre’s director, Kaajal Ramjathan-Keogh, said as an individual who had been convicted of being complicit in war crimes as well as being a fugitive from justice, Kouwenhoven could not remain free and at large in South Africa.

Ramjathan-Keogh said Kouwenhoven led an extravagant care-free life in an upmarket Cape Town suburb and was unrepentant for the thousands of deaths and atrocities for which he was responsible.

A prosecutor expressed “incredible frustration” on Monday when a war criminal’s extradition hearing was postponed again.
News
4 years ago

The centre said it filed this application to ensure Kouwenhoven could not retain his immigration status in South Africa, and sought to facilitate both the withdrawal of his visa and departure from the country.

This was to ensure he should commence serving the 19 year sentence handed down to him in the Netherlands.

“The South African authorities arrested him in December 2017 but he has successfully applied for release on bail.

"This arrest in South Africa is a hugely significant step in efforts to hold accountable those who fueled and profited from Liberia’s bloody civil war.”

She said even though the Netherlands had requested his extradition, the extradition proceedings had been repeatedly postponed and delayed at the behest of and to the benefit of Kouwenhoven.

Ramjathan-Keogh said the centre was concerned that the department of home affairs, despite being aware of this case for more than two years, had failed to take steps to cancel the visa.

She said the centre called on the director-general of home affairs to declare Kouwenhoven undesirable.

"He does not qualify for either a port of entry visa, any other visa, admission into the Republic or a permanent residence permit," she said.