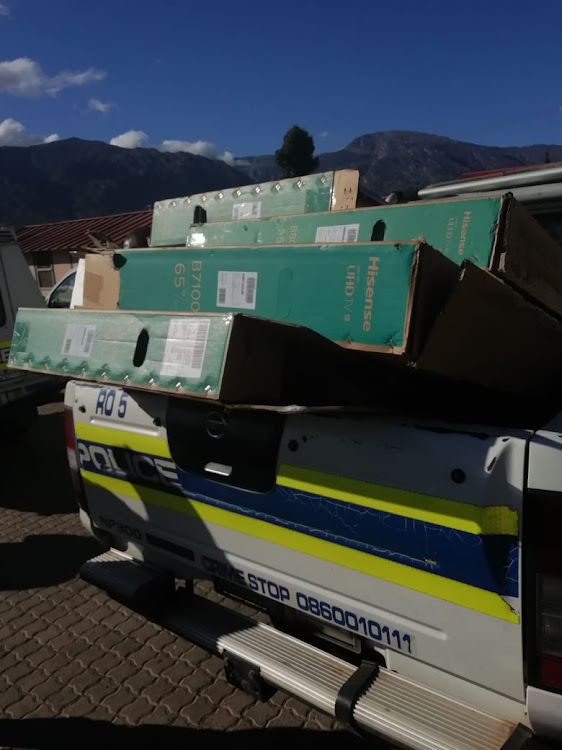 Police have arrested nine suspects and recovered 53 TVs that were looted during a community protest in De Doorns in the Western Cape last week.
Image: Supplied

Door-to-door raids by police have resulted in nine arrests and the recovery of 53 large LED TV sets that were looted during a community protest in De Doorns in the Cape winelands past week.

The protest led to the closure of the N1 between Touwsriver and De Doorns on Thursday after two trucks came under attack and their consignments were looted.

Scenes of protesters carrying away large boxes containing TVs from one truck and an assortment of condiments from the other were captured in videos and pictures that went viral on social media.

“Police teams including detectives promptly embarked on door-to-door raids in search of the stolen property. The police searches continued until Saturday. Nine suspects between the ages of 21 and 42 were arrested and some stolen property recovered in the raids,” she said.

Potelwa added that while the affected stretch of the N1 remained closed, local police — including public order police — were monitoring the area for flare-ups.

“All nine arrested suspects are expected to appear in court in Worcester on charges of theft and one for public violence.

“The SAPS in the Western Cape recognises the right of individuals to protest, however communities are urged to conduct action within the parameters of the law. Failure to abide by the law will have dire consequences,” Potelwa warned.

Police have arrested seven people and recovered some of the big-screen television sets stolen in a looting spree, but the N1 highway at De Doorns ...
News
1 year ago

The police were called to the N1 highway in De Doorns, Western Cape, when protest action turned into looting.
News
1 year ago

Looter continual: We rob trucks all the time, say schoolkids in De Doorns

Schoolchildren were among the looters who raided a truck on the N1 in the Western Cape after the driver was hit by a rock hurled from a footbridge.
News
1 year ago
Next Article