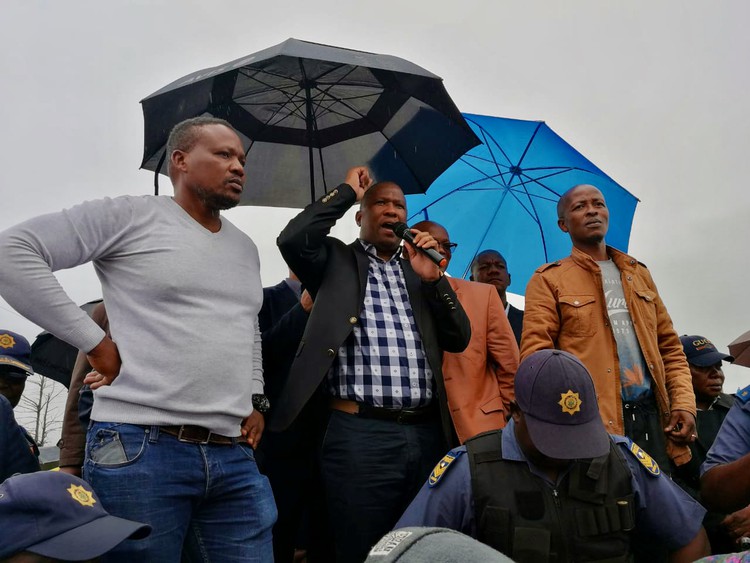 Residents said Ncetezo had failed to develop the town and asked that he and all Mnquma ward councillors leave the meeting.

Mabuyane came to address residents after a water protest that has now entered its second week. Shops have been closed in Butterworth CBD and the N2 has been barricaded with burning tyres. Residents are demanding the deepening of the Gcuwa and Xilinxa dams.

Two people appeared in Butterworth magistrate's court on February 14 on charges of public violence. They were released on warning.

At the meeting with the premier, community leader Sibabaliwe Dadaboshe told Mabuyane that residents were not happy with his tardy response.

“All Mnquma ward councillors are enjoying the salary they receive every month while sitting in their offices doing nothing. I always ask myself, what is it that they report to the speaker since they are not reporting to community members?” said Dadaboshe.

Protests and 'threats' force Eskom to suspend work in Butterworth

Eskom in the Eastern Cape has suspended operations in and around Butterworth after employees were threatened and insulted for working while the town ...
News
1 year ago

She said Ncetezo “used platforms at funerals to swear at protesters, instead of addressing the issue of a lack of service delivery in this town”.

Mnquma local municipality spokesperson Loyiso Mpalantshane said Ncetezo would never deliberately insult the community, and if there had been a misunderstanding he would readily apologise.

He said ward councillors called regular meetings to update the community and reported back to the speaker.

Mabuyane apologised to residents for taking a long time to visit the area. He said before coming to Butterworth he had spoken with the minister of human settlements, water and sanitation Lindiwe Sisulu. At the mention of Sisulu’s name, residents started shouting.

“Yhoo that liar!” one resident shouted.

He said the tankers were filling 120 rain water tanks at strategic points around Butterworth. But residents said the water tankers provided dirty water.

Elias Seloma stands on the banks of the Lepelle River, a stone's throw from his village of Elandskraal in rural Limpopo, scanning the murky water for ...
News
1 year ago

Mabuyane said deepening the dams would not be as easy as people thought. “Gcuwa dam is not full of sand as we thought. We sent engineers to check the dam and we find out that there’s clay, but that does not mean we are not going to dig deep,” said Mabuyane.

He said other options were to build up the walls around the two dams or to pipe water from the Tsomo River through the R735m Ngqamakwe project to Gcuwa dam. The project would provide a sustainable solution for Butterworth and had been brought forward to the current financial year.

He begged residents to be patient and said water tankers would be sent again to Butterworth to deliver water.

Before leaving the area, Mabuyane visited some of the boreholes and residents asked him to drink the water or at least use it to wash, but he refused.

Residents said they would suspend the protest while waiting for the trucks to deliver water.

Mabuyane also promised to look into the matter of ward councillors who are not calling general meetings with their communities. He said he would return to the area in three weeks' time.

Raw sewage from a municipal sewage works has been flowing into the Sundays River near Graaff-Reinet, Eastern Cape.
News
1 year ago

A trailer filled with kayaks worth around R100,000 that was stolen from Russian tourists in Mthatha earlier this week has been recovered in the ...
News
1 year ago