'We are leaving nothing to chance,' says Mkhize as 121 South Africans in China prepare for homecoming 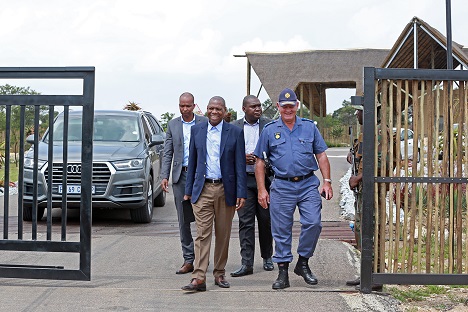 Health minister Dr Zweli Mkhize leaves The Ranch Resort in Limpopo, where the South African nationals who will be repatriated from China will be quarantined when they land the country.
Image: Thapelo Morebudi/The Sunday Times

It is all systems go as the government prepares to evacuate 121 South Africans stranded in Wuhan, China, the coronavirus epicentre.

Health minister Zweli Mkhize on Friday gave the quarantine site, which will be used to host the returning South Africans, the thumbs-up.

The Ranch Resort will house those returning from the Chinese city, as well as the medical and military evacuation team, for 21 days.

Eight more South Africans have tested positive for coronavirus, bringing the total to 24. Health minister Dr Zweli Mkhize on March 13 2020 announced the additional cases. He warned that the number could be higher because a number of positive test results were being verified.

Security has been beefed up at The Ranch Resort near Polowane, Limpopo, where a group of South Africans being repatriated from the coronavirus ...
News
1 year ago

Mkhize told reporters that he was happy with what he had seen.

“All the necessary arrangements have been made to receive those coming home. A military health centre has been established. This includes facilities which will help people with both minor and serious ailments.

He said that from the moment the final inspection was done, the entire area was now in total lockdown.

“No one, I repeat no one, will be allowed past this gate from now until the quarantine period is over. We appeal to the public not to come here,” he said.

Declining to say when the South Africans would land in SA, he said reports that they had received from the evacuation team were good.

“The evacuation team is in high spirits. Things are flowing smoothly and we are on track to bring our people home.

“There is a team on the ground in Wuhan and those who are coming home are being taken to a centralised area. From there they will be screened by the Chinese health authorities before they board the aircraft.

“They will again be screened by our staff. Special seating arrangements have been made and everyone will be allocated specific seats. Families will be kept together. There will also be an isolation facility aboard the aircraft,” he said.

Mkhize assured the country that the transportation of those being brought back to SA was being done in line with international best health practices.

“We are leaving nothing to chance,” he said.

New coronavirus infections jump to 24 in SA, and there could be more

Eight more South Africans have tested positive for coronavirus, bringing the total to 24.
News
1 year ago

The South African government has called a special Cabinet meeting to discuss the coronavirus, which has been declared a pandemic by the World Health ...
News
1 year ago

The coronavirus is considered most dangerous for the elderly and those with underlying health conditions. Having the virus can be fatal, and more ...
News
1 year ago