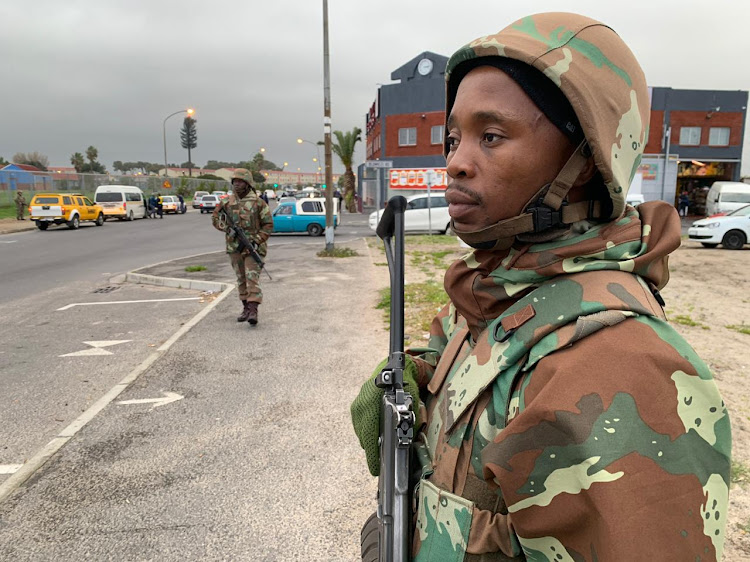 Soldiers have been deployed to various areas around the country to ensure lockdown regulations are adhered to.
Image: Anthony Molyneaux

Some of the defence force members who are deployed all over the country have been documenting their interactions with the communities they are in.

While some of the scenes seen in the streets, including soldiers punishing law breakers by making them do exercises,  have been controversial, one soldier, Lt Mandisa Mahlangu, said earlier this week she came across a “touching scene”.

“When interviewed, he made it clear that this action was a gesture of him giving back to the community and showing his appreciation to the soldiers who are also just human beings wearing a uniform. He quoted former president Nelson Mandela who said, ‘Be the change you want to see’.

"He said his plan is to continue to go to different locations around Mbombela where our members are deployed and give back until April 16”, Mahlangu was quoted as saying.

“He ended by saying this is his way of showing support in combating Covid-19.”

Mahlangu’s interaction with Mashaba was documented on the SANDF Twitter page.

In some areas, the soldiers put down their guns and were instead handing out pamphlets to community members, spreading awareness about the coronavirus.

Area Military Health Unit Mpumalanga | Pamphlets were handed to the people in the queue at Shoprite and our mission was accomplished as the shoppers testified that they have gained more knowledge about this disease.
#sandf#CoronavirusInSA#COVID19SA#StayAtHomeSA pic.twitter.com/biYB5Tp0kK

It was a similar situation in De Aar.

In some areas, the soldiers were spotted showing compassion to the communities they were in. When they were not pushing the grocery trolleys of the elderly, some were seen serving water to people in social grant queues.

SANDF serving water to those waiting in line.@SANDFCorpEvents #CoronavirusInSA pic.twitter.com/OWQ7RHCVWE

Tell us about your interactions with the SANDF during the lockdown period.

The ANC in parliament has praised soldiers for what it called “simple measures to discipline community members”.
Politics
2 years ago