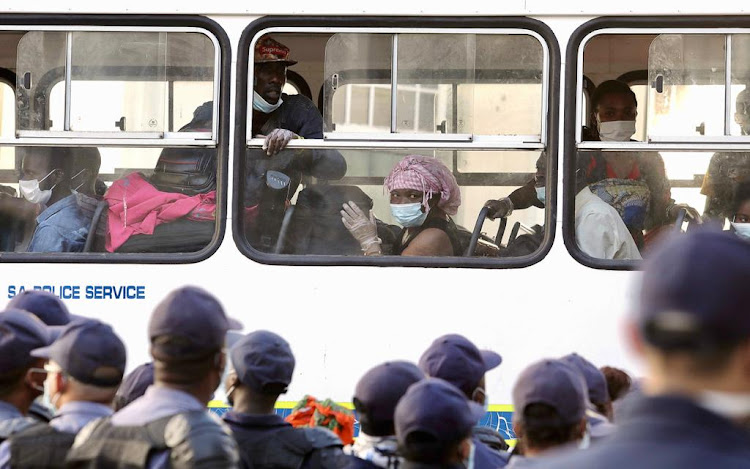 Refugees board a bus to an uncertain future. For the duration of the Covid-19 lockdown they are expected to be housed at a temporary facility at Paint City in Bellville.
Image: Esa Alexander

A barefoot little girl in a red flower print dress sat inside the Central Methodist Mission in Cape Town listening to the deafening banging on the ancient wooden church doors on Thursday afternoon.

Outside, invisible to her, police Tactical Response Team members were storming the building, using special equipment and sledgehammers to smash through the wood and glass doors to the entrance of one of Greenmarket Square’s oldest buildings.

It was the final hour of this three-month chapter in the little girl’s life, after her parents decided to take refuge at the church in December last year.

She and her parents are African refugees and, since last year, they have occupied spaces in Cape Town in an attempt to get access to what they believed would be better lives in Canada or Europe.

They had denounced SA and the xenophobia they claim to have been subjected to in the country and in October last year demanded that the UN High Commissioner for Refugees (UNHCR) aid them in their request to be taken elsewhere. 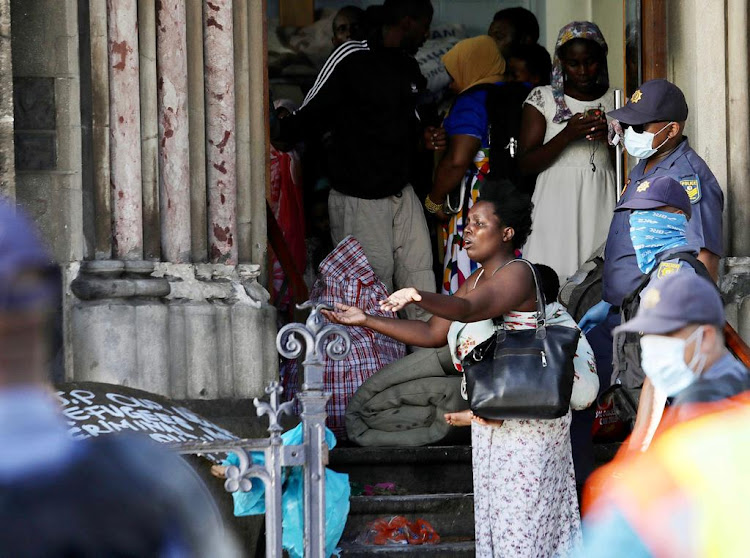 A mother with her child strapped to her back is led out of the Methodist church in Cape Town after police stormed the building.
Image: Esa Alexander

They would eventually be forcefully removed from the UNHCR office in the Waldorf Arcade building in St George's Mall after the group swelled to hundreds of refugees who set up camp there until their demands were met.

The group’s leadership have consistently clashed with authorities since then and the two self-styled leaders of the group, Papy Sukami and JP Balous, have been arrested.

Sukami, who faces charges of robbery and assault, was released on bail, but Balous is still in prison after he and other refugees were involved in a scuffle with police officers who arrived to arrest him on fraud charges while he was appearing in the Cape Town magistrate's court on various counts of assault on March 6.

But, before shutting the doors on Thursday, refugee leaders told reporters that they were the victims of SA’s xenophobic government, police abuse, and abuse by its people.

“We have nowhere to go. In the time of this sickness, throwing us out is not the solution, it’s exposing us and our children to this coronavirus,” said one of the refugees, Aline Bukuru.

She said the facility that the government was preparing to move them to was not adequate for them. She said they would be intermixed with homeless people and drug addicts in conditions they were not willing to expose their children to.

But inside the church, where hundreds of refugees were holed up, the conditions were far from sanitary. 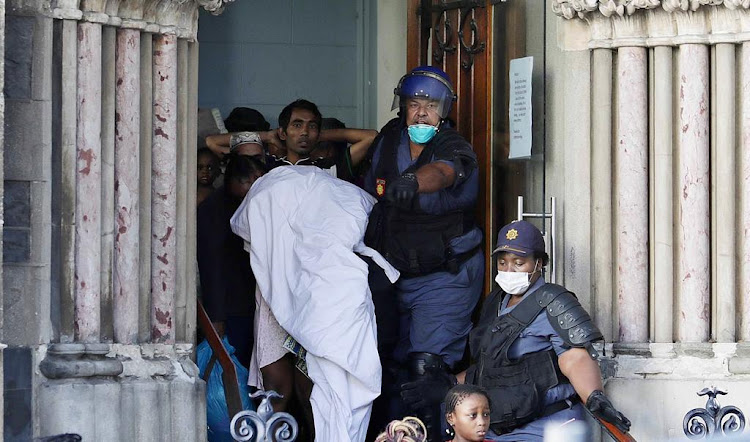 Refugees are led out of the Methodist church by riot police. Hundreds of refugees have occupied the church building since December.
Image: Esa Alexander

“We came in here before this outbreak came. I think they should think of a solution, not thinking of harming people. We are appealing with the people of this church, the pastor opened this church because he saw what they were doing to these people,” said Bukuru.

“We still want to move out of SA, the situation is still the same, there is still xenophobia,” she said.

Their other demand is that Balous be released. They believe he is innocent, a victim of manufactured claims and police brutality.

WATCH | 'You won't arrest me': refugee leader and supporters attack police in court

“If you remember when they removed us there was a woman who the media said was dead — that was me. I was lying there. I walked around with crutches for three months and I will never say SA is nice,” said Sheme.

“The people who beat me were police, I know them, I know all of their faces. I am a human being, I am a mother. I will never allow anyone to go through what I went through.

“JP [Balous]is innocent, he was not fighting anybody. They were killing him. No foreigners were fighting in court, it was the police doing that. Go look nicely at the video,” she added.

Earlier on Thursday morning, police management entered the building — with health, immigration and other government departments — to try negotiate with the refugees and get them to vacate the church in adherence with the government’s lockdown regulations. But to no avail. 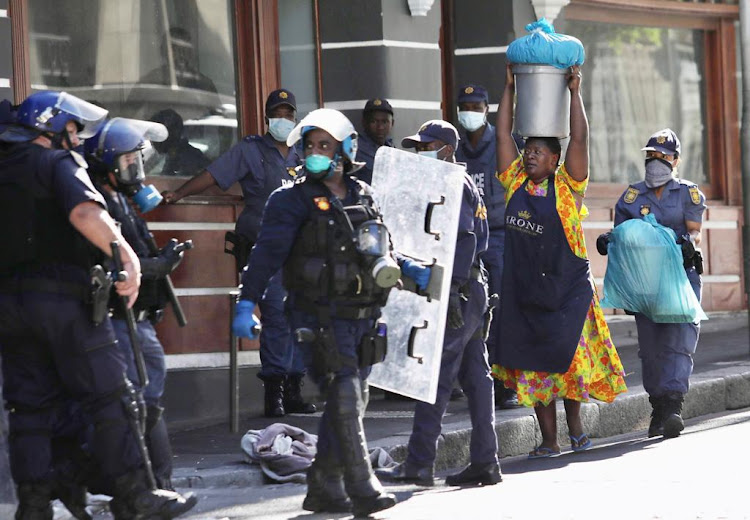 A refugee woman carries her belongings on her head as refugees are removed from the Methodist Church in Cape Town.
Image: Esa Alexander

After addressing the media, the refugees locked the wooden doors from the inside after unloading three supermarket trolleys filled with supplies, perhaps in anticipation for a lengthy siege.

The front door of the church held for two or three minutes before the police sledgehammer eventually struck a hole through it, sending splinters flying. At the back entrance, task team members were shouting orders after breaching the door.

Reverend Alan Storey, the church’s pastor who opened his doors to the refugees in December, stood next to buses waiting to take the refugees to Paint City in Bellville.

He bore a defeated and grave expression as the door broke. He had no words to describe his feelings, only that he was happy there were no injuries.

A few men then peeled out of the dark interior of the church with dazed and shocked expressions. 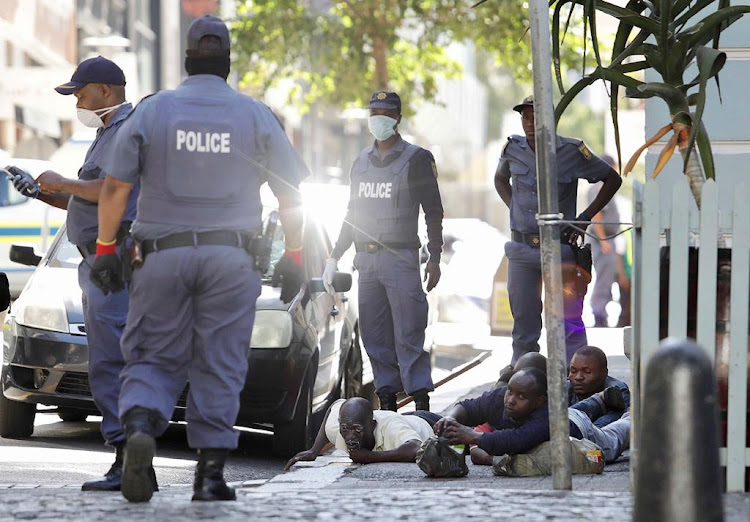 Some of the male refugees were ordered to lie down on the pavement while police tactical response team members cleared the church building of possible danger.
Image: Esa Alexander

Any planned resistance was rendered futile by the heavily armed and armoured tactical task team members. After they searched the premises for dangerous weapons public order police with riot shields and shotguns rushed in.

Refugees started rolling their bundles of belongings out the front door.

Among them was the small girl in the red flower dress standing barefoot among the group of refugees being rounded up on the cobble stone.

Her wide and bewildered eyes scanned the hostile sights around her in Greenmarket Square. The police guns draw her attention, their battle gear, then she looks at a policeman forming part of a perimeter around the church entrance.

It looks as though she tries to smile at him, but she quickly becomes self-conscious and grabs at her mother’s hand somewhere above her head while biting at her nails. 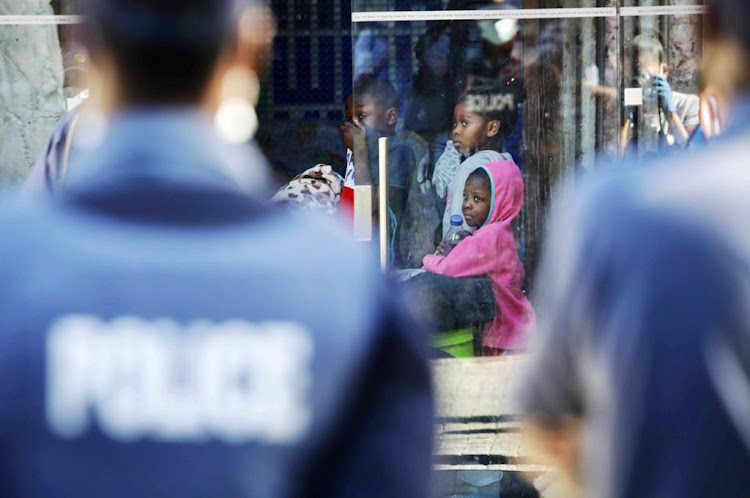 Refugee children await an uncertain future as the police remove them from the Methodist Church in order to enforce COVID-19 lockdown measures.
Image: Esa Alexander

But her mother and the other adults were arguing with police officers who were wearing masks to protect them from a virus that did not exist in SA when her parents decided to take refuge in the church building in December.

Police with riot shields intermittently pushed the groups into the buses. Babies cried and panicked parents and family members tried to reach across the police barricade crying out the names of loved ones who had yet to emerge from the church.

An immigration official screams at the top of her voice to calm them down.

“You are all going to the same place! We are not going to separate you! Calm down!”

When the little girl went into the church in December there were no masks on people’s faces, now police officials tell her to put out her hand so she can receive a spray of disinfectant, then she is given a mask.

Panic is written across the faces of most people. And in the square, and on Twitter where the story was being viewed in real time, the only voices were voices of indifference.

Even among reporters the sentiments were, “They should go home to their own country, they would never do this in their country. We are under lockdown, they must follow the rules”.

As she was bussed off to the next chapter in her life the little girl would have seen streets nearly empty of people, the result of a decision by leaders attempting to save their people from an unprecedented crisis.

Hundreds of refugees holed up in Cape Town's Central Methodist Mission refused to leave on Thursday.
News
2 years ago

Scores of armed police in battle gear stormed a church in the Cape Town city centre on Thursday afternoon to remove hundreds of refugees who had been ...
News
2 years ago

Self-styled refugee leader Jean-Pierre Balous may have unwittingly exposed himself to the possibility of being deported after he allegedly attacked ...
News
2 years ago