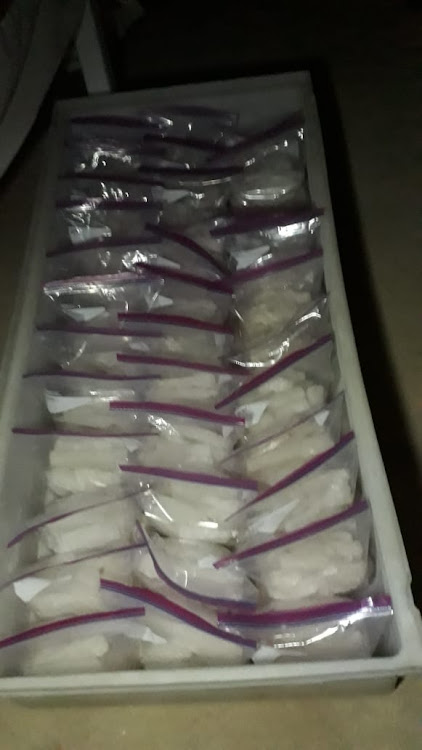 Police made a bust on the farm and arrested two suspects when they uncovered a drug lab and drugs worth R10m.
Image: Supplied/SAPS

Drugs worth R10m, four illegal firearms, ammunition and equipment for manufacturing drugs were recovered on a game farm outside Marblehall, Limpopo, on Tuesday.

“The information that was received from community members under Marblehall policing precinct was put to fruition when police members attached to the tekkie squad from Dennilton and members from Marblehall police station followed it up and discovered the drug lab on the farm,” said Mojapelo.

“The operation was conducted until the early hours of the morning. Preliminary police investigations revealed that more suspects could have been on the farm and this necessitated a massive manhunt. Due to the vastness of the area and a bushy environment, some of the suspects managed to evade arrest.”

Preliminary investigations point to the fact that the farm was allegedly bought recently by the suspect, who is of foreign origin and paid millions of rands in cash for the property.

“This drug lab has the capacity to supply the entire country with illicit drugs and therefore the action by the police in the Dennilton and Marblehall areas is commendable,” said acting provincial police commissioner Maj-Gen Jan Scheepers.

-This article has been amended to remove the name of the game farm as a query has been submitted to police on the exact locality of the bust.

Delft drug dealers have taken another hit after police seized R600,000 worth of drugs at a vehicle checkpoint on Symphony Way in Cape Town.
News
1 year ago

A man was arrested in possession of drugs worth more than R1m at a house in Robertsham on Thursday, the Johannesburg metro police department said
News
1 year ago