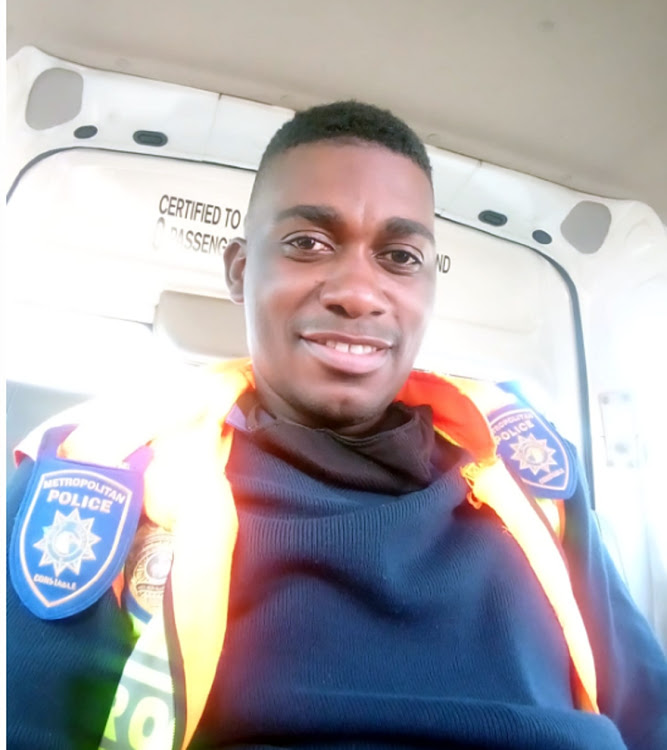 Constable Khathutshelo Mukwevho will be laid to rest this week.
Image: Supplied by family

They were good people whose families expected them to have long and successful lives.

Instead, in the early hours of Sunday morning, three Tshwane metro police officers were killed in the line of duty — allegedly by a drunk driver who was flouting lockdown regulations and driving recklessly on the wrong side of the road.

Edward Phaduli, 37, Khathutshelo Mukwevho, 29, and Silas Phala, 43, will be laid to rest this week — but for family, friends and colleagues, their senseless deaths leave behind pain and frustration that will last long beyond their final farewells.

Family members said Phala's death was another traumatic event for a family who had lost generations of male heirs. They called it a “curse”, which they had hoped they'd been able to overcome, given the officer's success.

Cousin and family representative Silelepo Mashilo said the family had high expectations of him, believing Phala could break their cycle of poverty.

“We were still expecting a lot from him ... We are really sad. I mean, he comes from a poor background, a very poor background. We were expecting him to raise the flag in his family. He was a workaholic ... he was still young but energetic.

“We had a very good relationship with him and we were always telling him to start a family so that we can have some grandchildren, but he was probably on his way towards that. He always visited our house and my siblings, and he would always phone — he wouldn’t spend a week without calling,” said Mashilo.

Survived by his sister and niece, Phala’s death reminded the family of their misfortunes.

“My great-grandmother and his grandmother were sisters. We are the third generation from that [lineage] and we were cursed [by the fact] that in our family the male children didn’t go very far in life. It's either that or the men die at an early age.

“It was very traumatising. His death took us back to our family’s pain.”

Mashilo said Phala was a non-drinker and called on the government to tighten alcohol laws.

“There is nothing wrong with alcohol, but there is something wrong with us as human beings. The death stats were down during lockdown but immediately when the rules were [relaxed] people started dying. We are appealing to the government to take a stand on alcohol and put rules and regulations properly,” he said.

There will be a memorial service for Phala in Pretoria on Wednesday. He will be buried in Limpopo.

One of Mukwevho's family members said the family was too traumatised to speak yet.

Mukwevho's mother Rachael told SowetanLIVE that her son was dedicated to his job and loved working as a metro police officer. She said Mukwevho was a loving son who was quiet but would tell her everything. She said the pain of his death was compounded by the loss of her husband in 2018. Mukwevho had been supporting her financially.

According to Tshwane metro police spokesperson Isaac Mahamba, the fatal accident took place on the N4 between Trans Orange Road and Rebecca Street in Pretoria west.

“It was about 2am [Sunday] morning when the officers spotted a vehicle driving recklessly and facing oncoming traffic in the Pretoria CBD. The officers tried to stop the vehicle, which was driving in a westerly direction, but it fled and officers gave chase,” he said.

The officers called for backup and were joined in the chase by three officers in a metro police vehicle. The vehicle in pursuit was then involved in a head-on collision with the police vehicle which was providing backup.

All three of the backup officers died on scene. The driver of the vehicle which was being chased also died on the scene, and a female passenger in the car was taken to hospital.

According to reports, several alcohol bottles were found in the offending vehicle, with some empty.

48 crashes, nine deaths, 100 injuries — in one province, during one weekend

On the first weekend since the ban on alcohol sales was lifted, 48 car crashes were recorded in Mpumalanga alone.
News
1 year ago