Nehawu hands over memorandum at Union Buildings as strike looms 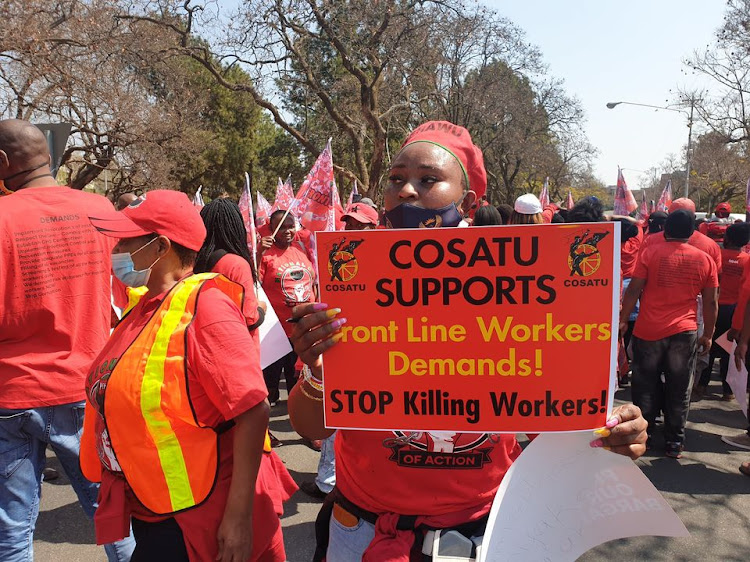 National Education, Health and Allied Workers' Union (Nehawu) members handed over a memorandum of demands to government on Thursday at the Union Buildings in Pretoria.

Nehawu is protesting against the salaries of public servants not being increased and lapses in the provision of personal protective equipment (PPE) for front-line workers during the Covid-19 pandemic.

In Cape Town, a group of Nehawu protesters was dispersed by police in front of  parliament.

Nehawu spokesperson Khaya Xaba said of the campaign: “We demand full compliance with the Occupational Health and Safety (OHS) Act by all workplaces, and ensuring that risk assessments and infection control and prevention measures are put in place, and the immediate establishment of OHS committees in all workplaces.

“Infected workers must return to work only on the following conditions: they have completed the mandatory 10 days of self-isolation, they have undergone a medical evaluation confirming fitness to work, [and] they strictly adhere to personal hygiene, wearing of masks and social distancing,” he said.

The union is seeking to explicitly prohibit managers from issuing or communicating any kind of threats or intimidating notices or letters to workers in such a way that they are forced to work when they have been diagnosed with Covid-19.

Part of the union's demands for improved workplace safety is the procurement and provision of adequate PPE for front-line workers, based on “credible figures of the total workforce” and the type of work performed by occupational categories of employees.

“We [also] demand government urgently fill all vacant posts in the public health-care sector and ensure that we start to build the building blocks for the implementation of the National Health Insurance [NHI] scheme,” said the union.

A call for “the abolishment of salary level 1 and 2 in the public service” is also contained in the memorandum.

The union said it requires a response within a period of seven days, failing which it will declare an intention to embark on a work stoppage from September 10.

The demonstration was supported by several organisations, including Cosatu and its affiliates the SACP, the South African Students Congress (Sasco), the Young Communist League (YCL) and the South African Union of Students (SAUS).

“There is no justification whatsoever for government’s failure to comply with the occupational health and safety legislation and regulations that seeks to protect workers, especially those in the front line of combating the pandemic,” said the memorandum.

The union briefed the media on Wednesday about the outcomes of its executive meeting where it discussed the grievances of health care workers, ...
News
1 year ago