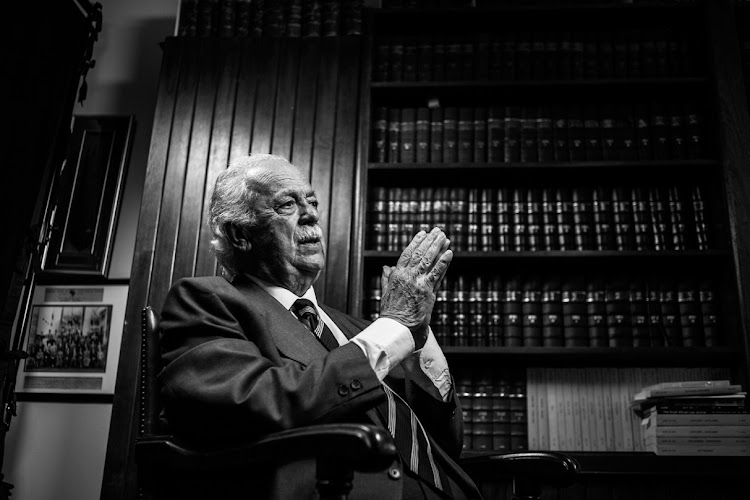 George Bizos is to be laid to rest on Thursday.
Image: GARY VAN WYK

Renowned human rights lawyer George Bizos will be laid to rest on Thursday.

Bizos died last Wednesday at his home in Parktown, Johannesburg.

His funeral service will take place at the Greek Orthodox Church starting from 11am, after which he will buried at the Westpark Cemetery in Randburg.

Human rights advocate George Bizos passed away peacefully at home, attended to by famiy  on Wednesday after a career and life that left an indelible ...
News
1 year ago

In accordance with lockdown regulations, the funeral service is expected to be attended by only 50 people and would be broadcast on several platforms.

Bizos, who only retired at the age of 90, represented both Walter Sisulu and Nelson Mandela in the treason and Rivonia trials.

During the height of apartheid, he dedicated his professional career to the fight for human rights.

He insisted that Mandela include the phrase “if needs be” in the former statesman's statement during his sentencing during the Rivonia trial: “It is an ideal which I hope to live for, and see realised. But if needs be, it is an ideal for which I am prepared to die.”

It is widely believed this saved Mandela from the death sentence.

Bizos is survived by his three sons and seven grandchildren.

'If needs be': The three words that saved Nelson Mandela

President Cyril Ramaphosa has joined South Africans in mourning the late human rights lawyer, George Bizos, who died on Wednesday at his Johannesburg ...
News
1 year ago