Khoi and San Centre launched at University of Cape Town 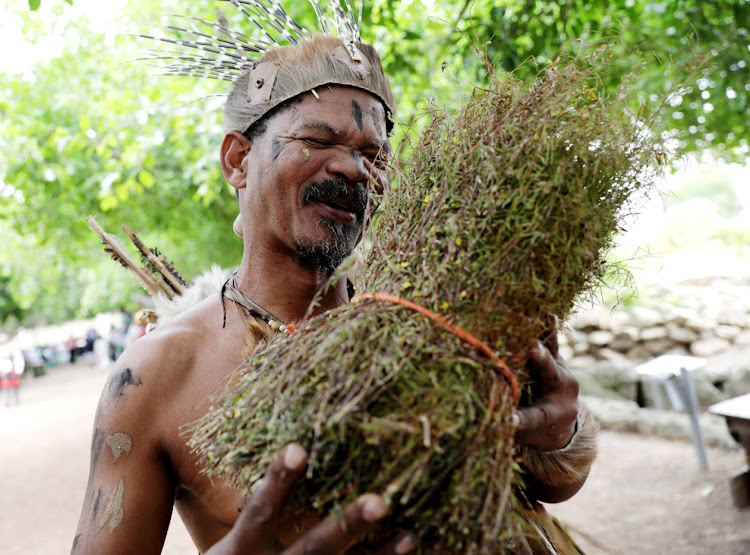 !’Aru Ikhuisi Piet Berendse, with a bushel of rooibos, carries the forms of heritage the centre aims to preserve.
Image: Esa Alexander

The University of Cape Town (UCT) has launched a groundbreaking Khoi and San Centre.

Speaking at the launch, vice-chancellor Prof Mamokgethi Phakeng said the centre aims to become the “foremost research centre of its kind, producing research of international standing”.

The centre will foreground erased or marginalised indigenous knowledge, rituals, language and “ways of knowing” of the San and Khoi clans across the university and its communities.

Many of their descendants still live in communities across the Cape Flats, and many are students, staff and graduates of the university. The development continues years of groundwork by academics such as Dr June Bam-Hutchison, who said she was “delighted that the archives — the languages, knowledge and rituals — of those who once lived on the slopes of the mountain were now being made visible through the centre”.

Under the vast sky of the Tankwa Karoo, 300km from Cape Town, the rescued remains of a Khoisan woman from hundreds of years ago found a final resting ...
News
2 years ago

Bam-Hutchison said: “It is almost unthinkable that these things have been moved to [the] centre at the historically white university associated so much with colonialism and those deep wounds of the past.”

Last year UCT held its maiden Khoekhoegowab language short course, a partnership between the Centre for African Studies (CAS) and the Centre for Extra-Mural Studies. With only 167,000 speakers remaining, Khoekhoegowab is one of the continent’s endangered indigenous languages.

An undergraduate programme offering the language is in development.

What happens when a pandemic strikes and your lifesaving drug is suddenly unavailable?
Science
1 year ago

The ministerial advisory committee chair said he was “deeply disappointed” at the behaviour of security forces tasked with protecting South Africans ...
News
1 year ago

Boffin makes a rock painting from the Cederberg really rock

An ancient rock painting in the Cederberg has been brought to life, reviving the sounds SA's first people made to summon rain to their arid landscape.
Lifestyle
1 year ago