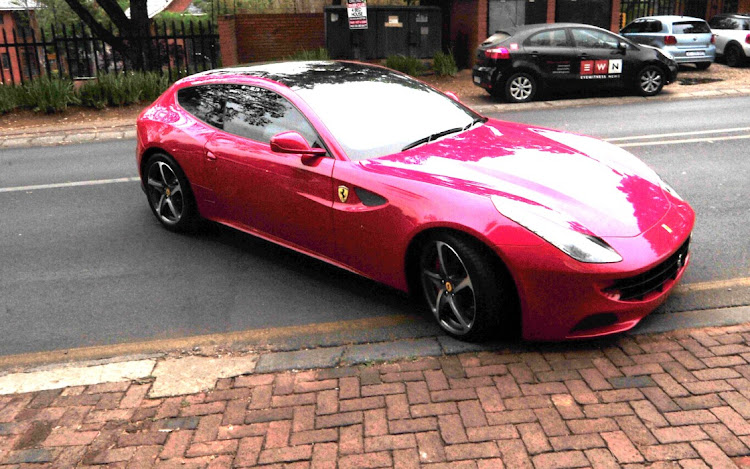 A 2017 Ferrari Four F151 with a book value of at least R3m is one of the luxury cars belonging to Edwin Sodi and his company that have been attached by the Asset Forfeiture Unit.
Image: Veli Nhlapo

Businessman Edwin Sodi and the Hawks have topped the trends list on Twitter after the National Prosecuting Authority (NPA)'s Asset Forfeiture Unit attached several luxury cars and properties belonging to Sodi and his company on Tuesday.

This comes amid an investigation into corruption relating to the 2014 asbestos project in the Free State.

Sodi, owner of Blackhead Consulting, and Diamond Hill Trading was awarded a R255m contract in a joint venture to identify and remove asbestos roofing from houses in the province.

The Asset Forfeiture Unit attached a fleet of cars including a 2017 white Bentley, a red Ferrari and a black 2019 Porsche Cayenne S which cost between R2m and R5m each. Among the properties seized was his Johannesburg mansion.

It is understood that among the assets which could not be located are a white 2017 Rolls-Royce Ghost Family Dawn, a blue 2017 Bentley Continental Supersports convertible and a 2017 Mercedes-Benz S65 AMG.

NPA asks those with the items, including several luxury cars, to come forward or ‘find themselves in trouble’
Politics
1 year ago

NPA spokesperson Sipho Ngwema urged anyone who has the vehicles to come forward as they could find themselves in trouble with the law.

While the Hawks and the NPA were commended for “eradicating” corruption, many social media users expressed disgust at the disregard for the needs of the poor.

“These arrests are just scratching the surface for now. The masterminds of state looting are still at large.” he wrote.

Here's a glimpse into the reactions:

We can laugh here because this is how we deal with sadness in this country but the Edwin Sodi saga and all others implicated by the Hawks breaks my heart. Senzeni kodwa? 💔

These arrests are just scratching the surface for now, the masterminds behind looting of state funds are still at large #Hawks #Sodi #kefilwe

What a time to be alive!

I want to thank the Hawks for shaking the country. We appreciate & welcome every arrest. We have suffered 4 a very long time under connected individuals bcoz we dont belong in their cycles in life.

For those who don’t get it as yet, the price for this #Asbestos crime is thousands of people in Free State who are struggling with respiratory diseases today. It’s not a victimless crime.

Hayini. Y’all want us to feel sorry for people who looted state funds meant for making the lives of the most vulnerable somewhat bearable?
Methlolo!

Hiking attacks in the iconic Table Mountain national park reached unprecedented heights in 2018 when muggings turned to violent murders. 50-year-old pilot, Doug Notten, was stabbed to death by a ‘kind-eyed’ killer. 65-year-old Ian McPherson was stabbed to death a few hundred meters from a peaceful Fish Hoek suburb. This murder would lead to a suspect, Zimbabwean Blessing Bveni. We look at how the state says Blessing Bveni operated before he was arrested.

A white Bentley, a red Ferrari and a black Porsche Cayenne belonging to Edwin Sodi and his company Blackhead Consulting have been attached by the ...
News
1 year ago

Victims of the Free State government's R255m asbestos roofing scandal this week gave chilling insight into a scam that lifted the lid on the murky ...
News
1 year ago

EDITORIAL | The promise of kept promises gives SA some hope

The NPA made good on its vow to make high-profile arrests. Hopefully it signals the change we desperately need
Opinion & Analysis
1 year ago