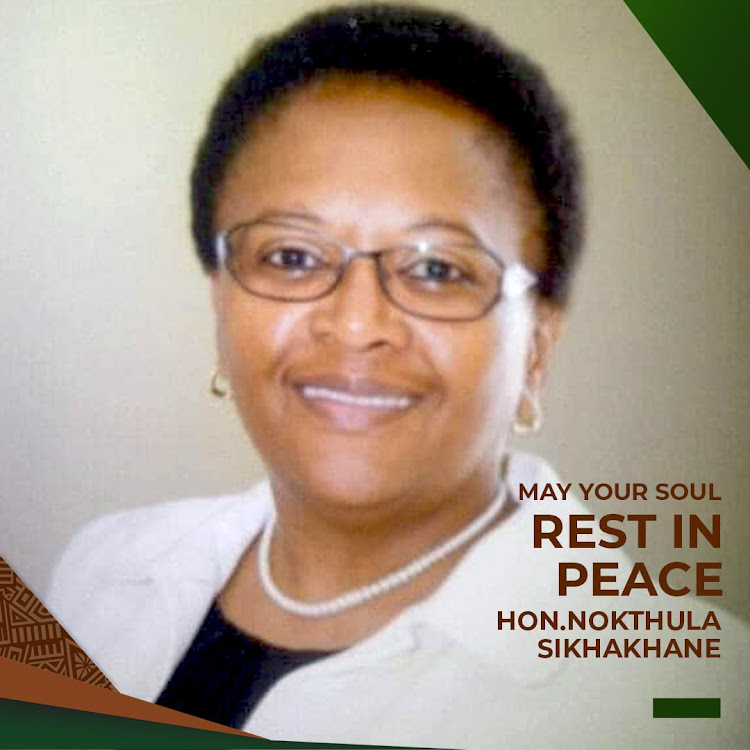 Nokuthula Sikhakhane, an adviser in the office of the Gauteng premier, died of Covid-19 related complications. Her family described her as humble and a fighter against any injustice.
Image: Twitter via @GPLegislature

Nokuthula “Matu” Sikhakhane was “the epitome of a complete revolutionary, very humble and feisty against any injustice”.

In particular, she “hated violence against women and children and fought for their rights”.

This is how the family of the late Sikhakhane — who was an adviser to the Gauteng premier's office — paid tribute to the 54-year-old this week.

Nokuthula Sikhakhane was lauded as an anti-apartheid activist with extensive political experience.
News
8 months ago

“She was a loyal, honest and selfless servant of the people, and left an indelible mark in our revolutionary struggle.

“She left behind numerous broken yet happy hearts due to her lifelong love and selfless service to her people whose circumstances pushed them to confront the apartheid enemy that denied them freedom, dignity and development,” her family said.

One of six children, Sikhakhane hails from the Thokoza in Ekurhuleni. She quickly became involved in student politics at school.

“She associated herself with student political activities that were aimed at liberating the people of SA from the draconian apartheid oppression of the black majority by a racist white minority. She devoted herself to political activism from her young age,” her family said.

After school, she obtained multiple qualifications, including in governance and leadership, archives and records management, and transitional justice and research through the University of Johannesburg.

FACES OF COVID | ‘I will fight,’ says son after dad dies of Covid-19 in hospital bed next to him

A well-known Cape Town pianist remains hopeful that he will overcome Covid-19 after he had to watch his father slowing losing his battle to the virus ...
News
8 months ago

Sikhakhane worked with the SACP after leaving the private sector, and would, in the mid-to-late 2000s and into the 2010s, join the Gauteng legislature as a representative of the ruling ANC.

“During this period, the ANC recognised her dedication, tenacity and discipline, and appointed her as deputy chief whip. From 2009 to 2014, she was redeployed to the Gauteng legislature as chairperson of agriculture and rural development,” her family said.

He then joined the premier's office under David Makhuru.

In paying tribute to her, Makhuru said: “Her advice and feedback was always frank and wise. I am deeply saddened by the untimely passing of Comrade Nokuthula Sikhakhane. We all prayed and hoped that she would survive after contracting Covid-19 but, sadly, she is no more. Gauteng has lost a diligent and loyal servant of the people who gave up her youth and dedicated it to the creation of a profoundly democratic, more inclusive and egalitarian human civilisation as well as an accountable and ethical government.”

Lost to Covid - remembering those who've passed in the pandemic

Covid-19 has claimed the lives of tens of thousands of South Africans, and the numbers are climbing as infections spiral.
News
5 months ago

Sikhakhane's family said that the anti-apartheid activist witnessed first-hand the brutality of the apartheid system, including that she saw the aftermath of her brother's savage beating at the hands of the police.

“As if to avenge the attack on her brother, she immersed herself in the national liberation struggle for the total emancipation of our people at an early age. She embraced the people’s struggles for ending white oppression or apartheid and colonial racism, and for the creation of a nonracial society as in the Freedom Charter adopted in Kliptown in 1955.

“She was committed to end class oppression of the working people by the brutal capitalism to create a society of equals without poverty and workplace exploitation but on the contrary workers taking charge of not only production but the instruments of production to produce for all of society not for profits; she was in the front-line trenches to fight the struggle for the liberation of women from patriarchy, racism and capitalism. In other words, she fully embraced the ANC-headed liberation movement’s National Democratic Revolutionary struggle to end race, class and gender inequalities,” her family said.

“Comrade Nokuthula was the epitome of a complete revolutionary, very humble and feisty against any injustice. More especially she hated violence against women and children and fought for their rights as a loyal, honest and selfless servant of the people and left an indelible mark in our revolutionary struggle.

“The baobab tree has indeed fallen,” her family said.

SA recorded 806 new Covid-19 related deaths in the past 24 hours, its highest ever single-day deaths so far.
News
8 months ago

Champion of rural women’s rights Sizani Ngubane was laid to rest in the KwaZulu-Natal midlands on Saturday, more than two weeks after she died alone ...
News
8 months ago

Dorah Sitole opened the door for us, say celeb chefs Zola Nene and The Lazy Makoti