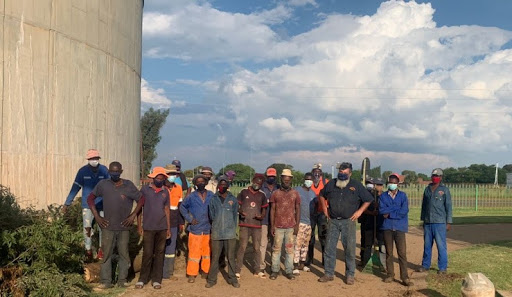 The community got together and got things done.
Image: Willie Jones

Fed-up with poor service delivery, and supported by a radical high court decision, two small towns in North West Province are taking charge of local government laxity and saying enough is enough. This attitude may be the start of a nationwide revolution against poor local governance, Anneliese Burgess writes in today’s Vrye Weekblad, and other towns may want to follow suit.

“Koster is a dust cloud of a town in the North West Province,” Burgess writes in the latest edition of the progressive Afrikaans weekly. “Municipal infrastructure has gone to pot, evidenced by sewage in the streets and rivers, taps that have run dry, and rubbish as far as the eye can see.”

It had been going on for years. Emotions reached a boiling point in 2018 when the mayor of this dilapidated town had the access road to her luxury guest house tarred. Her home, and other businesses she owns, subsequently went up in flames and she fled to Rustenburg, along with 12 other council members.

No sooner had the municipality been officially declared dysfunctional, than the seeds of community-based despair and a spirit of DIY took root in the community.

After several water trucks were burnt during violent protest action, the local ratepayers’ association went to court to demand that local residents be allowed to manage water services. The municipality committed to solving the problems and the province said it would assist with sewage to the tune of R60m, costs that would eventually escalate to an alleged R144m, but the Koster community kept suffering.

It was never going to work, says Carel van Heerden, who is leading the fightback that is galvanising other small towns. After five months of vasbyt, the concerned citizens of Koster asked the high court in Mahikeng to draw a line in the sand.

Despite a vigorous court challenge from the municipality, judge FS Gura gave the local authority 10 days to resolve issues in respect of the residents’ constitutional rights to clean water and a safe environment. In a slap in the face of local government, the right to manage Koster’s water and sewage infrastructure was eventually ceded to the community on January 7.

Read more about this and more news and analysis in this week's issue of Vrye Weekblad.

TEA PARTY AT NKANDLA | The former president has indicated he will defy a direct order from the highest court in the land to appear before the Zondo Commission on state capture, which he appointed. Ace Magashule has signalled his support, and Julius Mandela has a date for tea. Max du Preez raises the alarm.

OH CUBA | South Africans and Cubans are eternally bound to each other by a war fought on opposite sides, writes Marita van der Vyver.

FREE TO READ — COVID Q&A | What will happen if the vaccine fails to reach large numbers of people? Can the coronavirus mutate again? We have the answers to these and other questions.

FAREWELL TO CAPTAIN TOM | Captain Sir Tom Moore was an unlikely hero of the pandemic. We tell his ordinary, extraordinary story.

The movement of the rand against the US dollar in 2020 is a striking example of how difficult it is for economists and investors to predict the ...
News
3 months ago

Zuma was our Putin, our Mugabe, plus five highlights from 'Vrye Weekblad'

Last days of an angry and wounded president, plus five highlights from 'Vrye Weekblad'

Losing the PGA championship, and the millions of dollars it would bring, is akin to plunging a dagger in Donald Trump's heart, and a transgression he ...
News
3 months ago
Next Article