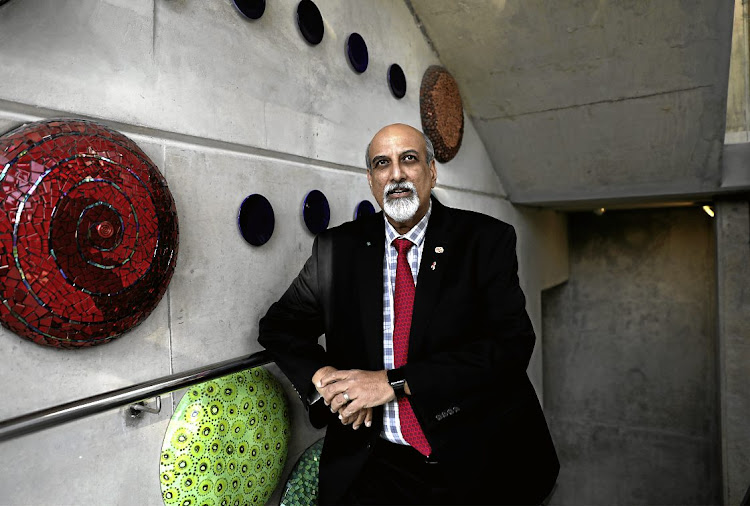 The matter is presently before the Durban high court in an application by community activist group Save our Berea to review and set aside the rezoning and town planning approval given by the eThekwini municipality which enabled the building, labelled a “monstrosity” by local residents, to be developed.

A demolition order was granted by Durban high court judge Esther Steyn in 2015. However, this was overturned by the Supreme Court of Appeal.

The original developers, Serengeti Rise Industries, has subsequently gone into liquidation and the building was  bought  by ITPRO Trading, owned by local businessman Jakes Pandor, on auction.

Work is still proceeding and a ninth storey is under construction.

Karim, the country’s chief scientific adviser on Covid-19 and who lives nearby,  has now made an application to join Save Our Berea’s court bid.

He says he lives on the eighth floor of an apartment building in nearby Musgrave Road, which is positioned at the rear of and diagonally opposite the 317 development.

In his affidavit, filed with the court, he says he has been aware of the development since 2014 when its legality was first successfully challenged.

He purchased his apartment in 2017, when the development had reached a height of seven storeys.

It remained at that height for three years and he assumed that the development had been abandoned and would be demolished.

“Though it was an eyesore, the extent of the impact on me was limited. But I became concerned when, in September last year, work resumed and it became apparent that in addition unsightly storeys were being added ... and it would have a substantial and direct impact on my property.”

He said he had contacted Save our Berea’s Cheryl Johnson and Adv Tayob “Pops” Aboobaker (who lives next door to the development and who initiated the initial court action) and had been informed that the litigation had been stalled because the municipality had not provided the record of the decision, necessary to kick-start the legal process and the filing of further affidavits.

He said he had read the application and agreed that there was “substantial evidence of irregularity”.

He said he intended to take steps to expedite the litigation by either compelling disclosure of the record or taking other appropriate steps.

Aboobaker has launched a similar application to join the proceedings. He says the real impact of the development cannot be experienced fully without an inspection in loco.

He said he had withdrawn from the matter because it had become too personal but he now believed he was best placed to assist the court with the outcome of his own investigations, including the fact that the original developers had demolished the existing building, built in 1917, without approval from heritage body Amafa.

He would also be able to disclose the findings of a City Investigations and Integrity Unit (CIIU) investigation which, while never made public and had still not been disclosed by the city, had “surfaced on his e-mail”.

Pandor’s attorney Reeves Parsee said the application had only been set down for April and his client had not yet decided on his stance towards it.

The city has not yet filed papers.

The highest bid for the controversial high-rise apartment building in Durban’s Currie Road at a public auction on Wednesday was R11m.
News
1 year ago

Civic action group Save Our Berea has launched an urgent application in the Durban high court to stop the sale, by public auction, of a controversial ...
News
1 year ago