Pharmacy chain Clicks said it was left 'embarrassed' by the actions of a Boulders Shopping Centre manager, and that its own store manager had to step in 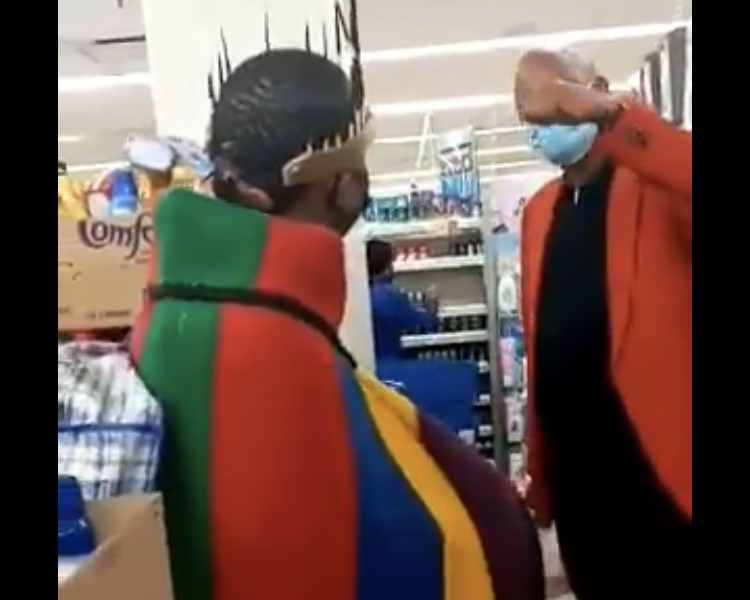 A manager at the Boulders Shopping Centre in Midrand confronted a man dressed in traditional Ndebele attire and asked him to leave a Clicks store in the mall. The man was finally allowed to continue shopping after a Clicks manager intervened, the pharmacy chain said.
Image: Screengrab

Clicks pharmacy will be issuing a “formal complaint” after a manager at the Boulders Shopping Centre told a customer that he was not dressed decently and asked him to leave.

In a video circulating on social media, the man is seen in traditional Ndebele attire. At the entrance to a store, the man is confronted by another man — later identified as a centre manager — who asked him to leave.

“Let's cut a long story short,” the manager says. “We've got a right of admission. I don't condone this in my mall.”

A woman, who appears to be the one filming the altercation, says: “This is Africa. You can't tell someone what to do or what to wear at which mall.”

The manager then implies that the man was dressed indecently, saying that the mall was “a public place” — to which the man says: “You are wearing Western; I am wearing African.”

The manager ultimately says this is “my mall” and refused the man entry.

Pharmacy chain Clicks — whose store in the mall was the scene of the incident — said that it would be taking action, as it was left “embarrassed” by the manager's actions.

In a statement on its official Twitter account, Clicks said that its store manager intervened and the man was allowed to continue shopping.

The Centre Manager of Boulders and the Boulders Centre security demanded that the customer leave.

Our store manager intervened and asked the Centre Manager to leave. The customer was allowed to continue shopping.

We will be putting in a formal complaint.

“Clicks Midrand Boulders did not ask a customer dressed in traditional Ndebele attire to leave the Clicks store. The centre manager of Boulders, accompanied by Boulders Centre security, entered the Clicks store and demanded that the customer leave.

“The Clicks store manager intervened and asked the centre manager to leave. The customer was allowed to continue shopping.

“We are extremely embarrassed by the centre manager's behaviour and will be putting in a formal complaint,” Clicks said in a statement.

The ANC is demanding that eNCA explicitly apologise and demonstrate genuine remorse through practical antiracism steps within its organisation.
Politics
4 months ago

A New Zealand Maori leader who was ejected from parliament this week for refusing to wear a necktie in the chamber said forcing him to a Western ...
News
5 months ago