'This evil is removed from society': judge to Tshwane serial rapist 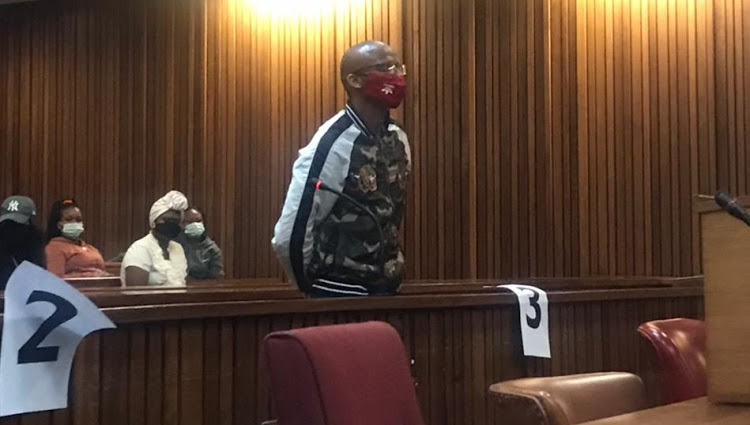 Sello Abram Mapunya terrorised the communities of Atteridgeville, Mamelodi, Olievenhoutbosch and Silverton from 2014 until he was arrested in March 2019.
Image: Tankiso Makhetha

“The accused was hell-bent on infringing on society's most vulnerable and their right to dignity and security. He failed to show any remorse.”

It was with these damning words that Pretoria high court judge Papi Mosopa sentenced Mapunya to 988 years’ imprisonment plus five life sentences and ordered that his name be entered into SA’s sexual offenders register.

The 33-year-old Mapunya was convicted on Wednesday for 41 rapes and 40 separate house breakings and house robberies, as well as assault with the intent to commit grievous bodily harm, robbery and theft.

Mapunya’s crime spree, committed while he lived with his girlfriend, eight-year-old son and four-year-old daughter in Pretoria, saw him attack women in Tshwane’s suburbs of Nellmapius, Mamelodi, Silverton, Olievenhoutbosch and Atteridgeville.

Convicted serial rapist Sello Abram Mapunya, who raped and robbed 56 women across Pretoria suburbs for five years, has been given four life sentences ...
News
1 year ago

In delivering the sentence, Mosopa, who described Mapunya and his deeds as evil, said he wanted it [the sentence] to be a lesson to “others out there who think that they can prey on society’s most vulnerable”.

“The sentence I am imposing will show others that women’s bodies are not commodities and cannot be abused with impunity,” the judge said.

“These sentences will not run concurrently because they were not committed at the same time. They occurred separately over five years. Therefore you will be sentenced for every crime you committed separately.”

Mosopa told Mapunya, who struck a lonely figure in the dock of courtroom GA, which was packed to capacity with his victims and their families, that he was being sentenced to life for the rape of his teenage victim, as well as for raping four of his other victims multiple times during their separate attacks.

While you have children of your own, who you seem to love dearly, you had absolute disregard for the children who witnessed you raping their mothers.

“Evidence presented in court showed that you studied your victims. There is no doubt that you can be classified as a serial rapist.

“Your modus operandi was the same. Your evil saw you break into homes in the early hours of the morning, shine a torch in your victims’ faces so that they could not identify you, and cover them with blankets before you raped them.

“In some cases you raped and violated your victims in front of their husbands and children. Some of them you dragged from their beds and raped them in the street.”

Mosopa said the sentence had to take into account the heinousness and brutality of the crimes.

“You did not use a condom. At least one of your victims tested HIV-positive after you raped her. Before her rape she was HIV-negative. It was only through the urgent intervention from hospital staff that your other victims are not HIV-positive.”

No background of abuse in rapist's life

Mosopa said sentences, while having to take into account mitigating circumstances, also had to reflect the severity of the crime.

He said Mapunya did not present any mitigating circumstances.

“You were properly raised and did not suffer abuse [as a child], yet you involved yourself in criminality in the early stages of your life.

“You are a first offender, but you did not just commit one offence. You perpetrated these crimes while living with your girlfriend and children. You would leave your home and go out and violate the victims in the presence of their families.

“While you have children of your own, who you seem to love dearly, you had absolute disregard for the children who witnessed you raping their mothers.

“In one of your attacks you threatened to rape your victim’s two children, aged two and four, when she refused you. She only relented to save the lives of her children.”

Victims struggling to rebuild their lives

Mosopa told Mapunya the victim impact study reports provided to the court only gave a brief glimpse into the terror he brought down on so many.

“Some are suicidal, all are angry towards men and most have relocated from their homes. You crippled the soul of your 14-year-old victim.”

He said when Mapunya began his “evil deeds”, he violated women and threatened them with a weapon.

“But as time progressed, your propensity for violence increased, with some of your victims stabbed with screwdrivers and beaten with hammers.

“Crimes against women and children have reached alarming proportions. Women are no longer free to walk the streets without fear of being raped or robbed. They are no longer safe in their own homes.

“It took police, through the use of modern technology, five years to catch you. Society’s last hope is the courts. Society has to be able to rely on this court to ensure that this evil is now removed. Your lawlessness ends now.”

One of Gauteng's most wanted alleged serial rapists was nabbed after he apparently returned to one of his victims, who he did not recognise as ...
News
1 year ago

Serial rapist Siyabulela Mkayo has been sentenced to four life terms and 125 years in prison for raping, assaulting and robbing eight women over six ...
News
1 year ago

A man suspected to be Ekurhuleni’s most prominent serial rapist has allegedly struck again.
News
1 year ago