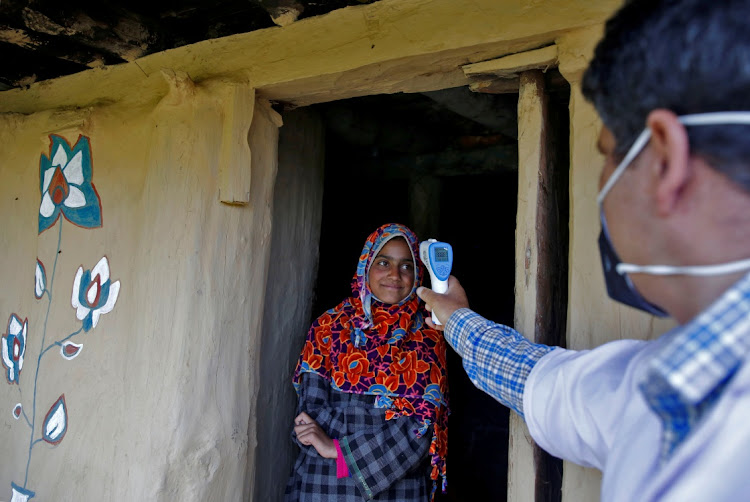 A healthcare worker checks the temperature of a shepherd girl at her hut during a Covid-19 vaccination drive at a forest area in south Kashmir's Pulwama district June 7, 2021.
Image: REUTERS/Danish Ismail/File Photo

It "goes without saying", health department director-general Dr Sandile Buthelezi said on Tuesday night, that the placing on special leave of health minister Dr Zweli Mkhize meant "these are difficult times we find ourselves in".

This latest development would not deter health officials, promised Buthelezi.

The Tshwane University of Technology has suspended contact classes at all its campuses, saying the surge in Covid-19 numbers, particularly in Gauteng, was a cause for concern.

Institution spokesperson Phaphama Tshisikhawe said the suspension was from Monday and since then, the institution had turned back to online learning and provided students with the necessary data to go online.

“Teaching and learning will not stop. This is being done to help stop the spread of the virus. We are not immune to the spreading of the virus as we have seen it happening in the communities we are in,” Tshisikhawe said.

The national coronavirus command council (NCCC) has recommended that the cabinet extends the national state of disaster to July 15, acting minister in the presidency Khumbudzo Ntshavheni confirmed on Tuesday.

Mkhize, whose position will temporarily be filled by tourism minister Mmamoloko Kubayi-Ngubane, has been embroiled in the R150m Digital Vibes tender scandal, which is being investigated by the Special Investigating Unit.

Schools in Mexico have been shut for nearly the entire duration of the coronavirus pandemic to curb infections. In spite of the strict measure ending on Monday, nobody seems to want to go.

The International Monetary Fund (IMF) has approved $650 million in aid to Senegal to support the West African country's Covid-19 recovery, it said in a statement late on Monday.

The announcement follows an earlier payment of $442 million to Senegal in April 2020, also to mitigate the economic effects of the coronavirus pandemic, the IMF said.

The 18-month arrangements ... will provide a policy anchor for the next phase of the authorities' Covid-19 response and support a strong and job-rich recovery," it said.

KwaZulu-Natal health authorities have launched a series of province wide roadshows to drum up public support for vaccination against Covid-19, as infections rise.

Many more men in India have received Covid-19 vaccines than women, government data showed on Tuesday, highlighting gender disparity in the country's immunisation drive that has also disadvantaged the rural population.

India has partly or fully vaccinated about 101 million men, nearly 17% more than women. Men account for 54% of the total number of people inoculated, according to the data.

Many federally administered regions, the capital Delhi, and big states such as Uttar Pradesh have seen some of the worst inequities. Only Kerala in the south and Chhattisgarh in central India have vaccinated more women than men.

"We are noticing that men, especially in towns and villages, prefer to take the vaccine before women as they have to travel for work, while women are relegated to domestic chores," said Prashant Pandya, medical superintendent at a big government hospital in the western state of Gujarat.

Health officials say rumours about vaccines disrupting women's menstruation cycle and reducing fertility have also contributed to the skewed data. The government has rejected the concerns."

Kuwait has approved the Covid-19 vaccine developed by Johnson & Johnson, the state-news agency KUNA reported on Tuesday.It is the fourth vaccine approved by Kuwait after those of Pfizer BioNTech , AstraZeneca and Moderna.

China's southern Guangdong province, spooked by a rise in novel coronavirus infections since May, stepped up mass testing this week in a handful of cities, including those that have yet to report a single case.

While the numbers of confirmed infections and asymptomatic cases remain small compared to massive outbreaks seen in other countries such as India and Brazil, China is taking no chances.

Guangdong, China's manufacturing hub and biggest province by economic output, has reported more than 110 confirmed cases since May 21. Its provincial capital Guangzhou has accounted for almost 90% of the confirmed cases, spurring the city of over 18 million people to ramp up mass testing.

Since starting the mass testing on May 26, Guangzhou has taken nearly 28 million nucleic acid samples, with 40 people showing positive for the coronavirus, a spokesperson of the city's health authority told reporters on Tuesday.

A top Japanese virologist and government adviser has said there was a risk of spreading Covid-19 infections during the Tokyo Olympics, the Times of London reported on Tuesday, the latest high-profile warning about the global sporting showpiece.

“The government and the organising committee, including the IOC (International Olympic Committee), keep saying they’re holding a safe Olympics. But everybody knows there is a risk.

It’s 100 per cent impossible to have an Olympics with zero risk...of the spread of infection in Japan and also in other countries after the Olympics," the Times quoted Oshitani as telling the newspaper.

"There are a number of countries that do not have many cases, and a number that don’t have any variants. We should not make the Olympics (an occasion) to spread the virus to these countries," he added, noting most countries lack vaccines.

Already postponed from last year because of the pandemic, a scaled-down version of the Games with no foreign spectators is set to start on July 23 despite public fears the event could spread the coronavirus and drain medical resources.

However, a former Olympian turned public health expert said she believed the Games can be pulled off with an acceptable level of risk.

"There will be cases, but having one case or a couple of cases doesn't mean that it was a failure," Tara Kirk Sell, a professor at the Johns Hopkins Bloomberg School of Public Health, told Reuters on Tuesday.

Face masks is adding to a glut of plastic waste that already threatens marine life off the coast of Bauan, a popular dive site in the Philippines' Batangas province.

Almost one in every five Cambodians has already received a dose of anti-coronavirus vaccine, catapulting the country well past wealthier, bigger Southeast Asian neighbours. Like the doses, the success story is labelled 'Made in China'.

Already one of China's closest allies, Cambodia kick-started inoculations with a bigger donation of vaccines from China than any other country in the region — in addition to Chinese vaccines it had already bought itself.

SA's Health Products Regulatory Authority is awaiting information from the US Food and Drug Administration that contamination problems at a Covid-19 vaccine plant in Baltimore are resolved.

A report on the origins of Covid-19 by a US government national laboratory concluded that the hypothesis of a virus leak from a Chinese lab in Wuhan is plausible and deserves further investigation, the Wall Street Journal said on Monday, citing people familiar with the classified document.

A woman who the health department says is 119 years old has become the oldest person in SA to receive the Covid-19 vaccine.

Nomamelika Philiso received her vaccine at her home in Mandleni, Alfred Nzo municipality, in the Eastern Cape, the health ministry announced on Monday.

Lockdown restrictions are being eased in many Indian states, as the country records its lowest number of daily coronavirus infections in two months. Shops, malls and markets in New Delhi reopened on Monday, but even as the economy restarts, some states are already preparing for a third wave.

New Zealand's Prime Minister Jacinda Ardern said on Tuesday that she would get her first Covid-19 shot at the end of next week, as the country prepared to receive another 1 million doses of the Pfizer vaccine.

"For me, it's been important that I allow those in the most at risk group... to be prioritised," Ardern said in a news conference.

"I'm choosing to be vaccinated at this point in order to play my role in demonstrating that I consider it to be absolutely safe and also really critical to keep others safe," she said.

Pfizer has scheduled delivery of an estimated 1 million doses of vaccine to New Zealand in July, Ardern said.

The Pacific island nation, which has been among the most successful in the world in containing the spread of Covid-19, has so far fully vaccinated about 250,000 of its 5 million population.

About 20,000 doses a day are being administered, and the Pfizer deliveries will enable that pace to increase significantly, Ardern said.

Spain reopens to all vaccinated tourists

Spain welcomes vaccinated people from anywhere in the world in a move to galvanize a recovery in its tourism sector.