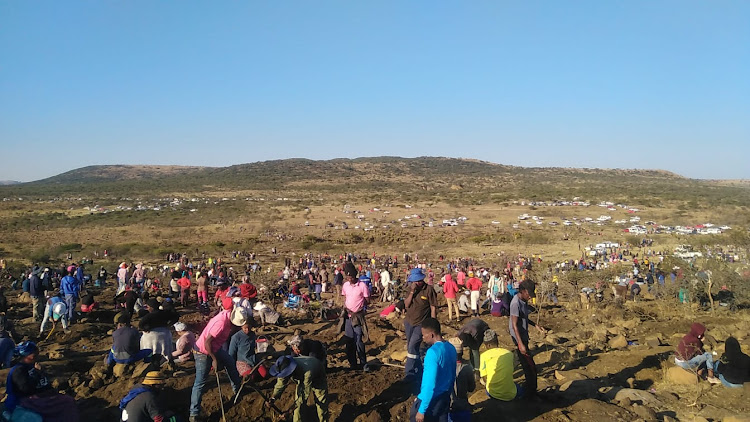 Hordes of people turned out to claim their share of minerals found in the ground in KwaHlathi near Ladysmith
Image: Mluleki Mdletshe

Stones collected at KwaHlathi near Ladysmith, where scores of people have been digging for what they believe to be diamonds, have turned out to be quartz crystals.

Ravi Pillay, the KwaZulu-Natal economic development, tourism and environmental affairs MEC, told a media briefing on Sunday that tests conducted conclusively revealed that the stones discovered were not diamonds as some had hoped.

“In fact what had been discovered are quartz crystals,” Pillay said.

The area has been gripped by excitement after the discovery of the stones went viral a week ago. This resulted in hordes of people converging on the area to join in on the mining activities.

Pillay said the provincial government was concerned as this posed a huge risk because of Covid-19 and the resultant serious degradation of the environment.

He said officials of the department of mineral resources & energy , geoscientists and mining experts conducted an inspection of the site on Tuesday and a team was able to collect a sample of the stones.

He said after the visit to KwaHlathi, a technical subcommittee consisting of the KwaZulu-Natal department of mineral resources & energy and energy officials, Council of Geoscience, the SA Diamond and Precious Metals Regulator and Mintek analysed the  samples and produced the preliminary report.

“The site of informal mining practices is geographically located on the edge of the ... zone where diamonds are not present. This was confirmed by geological and chemical analysis that was conducted,” Pillay said.

Earlier on Sunday afternoon, the intergovernmental  task team looking into the matter met community leaders and representatives to give them the report-back.

Ladysmith Black Mambazo sang about diamonds on the soles of one’s shoes in their 1986 hit with Paul Simon.
News
3 months ago

Camp chairs, food stalls and hopeful diggers have crowded an area rumoured to be full of the precious gems
News
3 months ago

The team discusses the ANC's cash crunch and the politics of KZN's 'diamond rush'.
Politics
3 months ago