Private healthcare groups say they have contingency plans in place 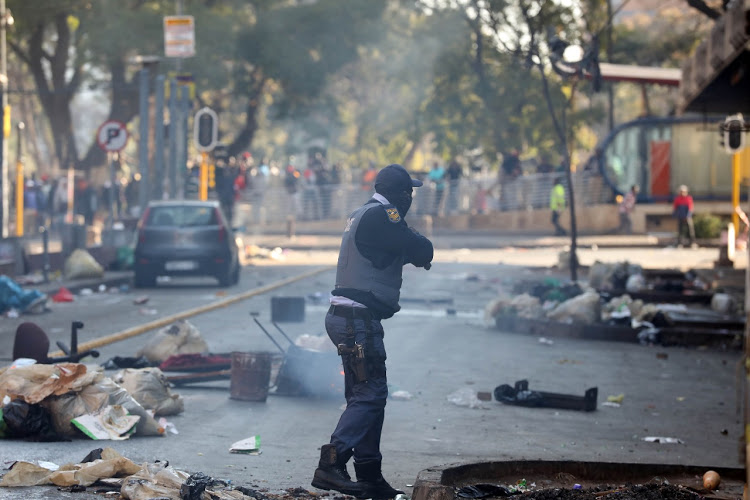 The violent protests that erupted in the country have affected the healthcare sector in that some workers are unable to get to work and some deliveries can't reach facilities.
Image: Veli Nhlapo

Ongoing violent protests hampered healthcare at some hospitals and the rollout of vaccinations in Gauteng and KwaZulu-Natal on Monday.

Dr Frans Skosana, Netcare Olivedale hospital pulmonologist, told TimesLIVE that the protests had prevented some staff members from being able to report for duty.

Skosana said also the security risk also hampered hospital deliveries including that of much-needed oxygen for the treatment of Covid-19 patients. He said oxygen levels were at 23%, but they were counting on deliveries late on Monday night.

Earlier on Monday, Skosana tweeted that the oxygen levels were about 25%, only enough for about 24 hours.

This is what this chaos is doing to hospitals. This is just one aspect. Lives at risk. pic.twitter.com/V1AubemQvN

Oxygen supplier Afrox said that it had not stopped operations despite the ongoing violence.

“I can confirm that Afrox has not stopped operations. There are some sites with no staff due to the unrest but our operations are continuing,” Nolundi Rawana, Afrox spokesperson, said.

Private healthcare groups said they had put contingency plans in place in response to potential threats caused by the protests.

“We can confirm that Netcare facilities in KwaZulu-Natal and Gauteng are operational as normal. Contingency plans are in place to ensure sufficient staffing and oxygen to care for patients in the hospital. Where needed, some of the hospitals have been placed on divert,” Jacques du Plessis, MD of Netcare’s hospital division.

Mediclinic Southern Africa (MCSA) said access to some of its facilities proved challenging, while the delivery of some supplies, as well as movement of patients between facilities, had also been affected.

“The contingency measures that are in place include contingency staffing, the temporary closure of the vaccination centres in areas at risk — in line with the Department of Health’s directive in this regard — and the cancellation of elective surgeries in areas of unrest. MCSA is also endeavouring to secure the delivery of critical supplies like oxygen at this time of the Covid-19 pandemic,” Mediclinic Southern Africa said in a statement.

Meanwhile, the Gauteng government condemned the sporadic violent protests and the affect they have on the provision of services across the province.

“Some provincial government services, including vaccination sites in the affected areas, have had to temporarily close due to safety concerns by both the staff and members of the public. Emergency Medical Services (EMS) teams are equally experiencing difficulty in responding to distress calls in communities due to limited access,” the province said in a statement.

The protests also disrupted the rollout of vaccinations at several sites.

Discovery Health told TimesLIVE that it has temporarily closed its vaccination sites including those in partnership with Virgin Active, in the interest of the safety of those seeking vaccines and employees.

“We took heed of the provincial government's and National Departments of Health’s decisions to suspend the vaccine rollout in KZN and Gauteng, given the violent protests.

“We have recognised that closing vaccination sites is unfortunately necessary to ensure the safety of both employees and attendees for vaccination. With our country in the midst of the third wave of Covid-19, and experiencing tragic morbidity and mortality as a result, there is no more important time to deliver a high-velocity mass vaccination campaign. We hope to resume vaccinations as soon as we can assure safety for our employees and attendees to the sites.” said Noach.

Discovery said all Monday afternoon bookings made on the Discovery Vaccine Navigator platform were cancelled.

“We are reaching out to inform those that have booked.”

Netcare also confirmed that all of its vaccinations sites in KZN were closed.

“As per the directive received from the national department of health, all vaccination stations in KZN, including the one at Netcare St Augustine's Hospital, have been closed.” said Netcare.

Gauteng premier David Makhura on Monday said the riots in Gauteng were hurting the government's ability to provide essential services. He said the volatile environment has seen people struggling to get to their workplaces because of limited access and services being disrupted across the province.

“To this end, some provincial government services, including vaccination sites in the affected areas, have had to temporarily close due to safety concerns by both the staff and the public. Emergency medical services (EMS) teams are equally experiencing difficulty in responding to distress calls in communities due to limited access,” said Makhura.

Meanwhile, eThekwini said healthcare facilities (clinics) and community vaccination sites were suspended because of the unrest.

The SA Human Rights Commission has expressed concern over the looting of copper piping worth R30m at the Charlotte Maxeke hospital in Johannesburg.
News
3 months ago

More than 30 private ambulance services in KwaZulu-Natal stopped operating to protect their vehicles from rampaging protesters on Monday.
News
3 months ago