Metro police officer among the 19 fatalities now recorded in Gauteng 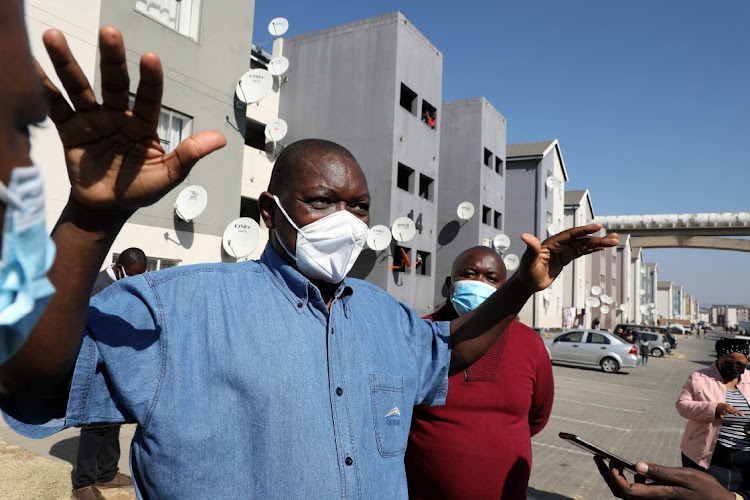 Gauteng premier David Makhura is calling for peace and calm following a deadly stampede which claimed the lives of 10 people at the Ndofaya Mall in Soweto.

The provincial death toll as a result of violent protests and looting of businesses has risen to 19, he said.

Makhura rushed to Meadowlands in Soweto following a public outcry and calls for help to contain the situation.

“This is destroying everything we had been building. The progress we had made in the township economy is being reversed by this looting, destruction and shutting down. The looting has to stop.”

Protests and looting continued on Tuesday despite the deployment of soldiers in some areas.

“We are calling for people to take charge. This cannot continue to happen in our areas.”

The premier said shops were being targeted, including many owned by foreign nationals.

Makhura said of the 19 people killed, one was a metro police officer.

“Protesters were flooding the mall, when criminals opened fire on them while they were monitoring the situation and trying to maintain law, order, peace and stability in the area.

“The ambulance couldn't get to the scene. Alternative means were made to get him out, but he succumbed en route to hospital,” said Thepa.

A shot EMPD officer died on the way to hospital as looting continued while President Cyril Ramaphosa vowed the state would crack down on the anarchy.
News
11 months ago

Thepa said the officer was stationed at Zonkezizwe precinct and would have been in the service for 12 years on Tuesday.

“His colleagues who witnessed the incident have been provided with the necessary professional support."

“It is regrettable that the officer died at the hands of the community he worked so hard to serve and save, it is extremely unfortunate that we have lost such a dedicated member of staff who respected and loved serving the people.

“We do hope that the community will assist us find the perpetrators of this senseless act and put them behind bars where they belong,” Mapiyeye said.

The premier said part of the violence was systematically organised by people who wanted to create harm.

“We will get to them. We will put them behind bars,” said Makhura.

“We want communities to work with us, to arrest these people, to calm the situation and make sure the criminal element does not take over.”

In a bid to bring the riots and looting in Gauteng under control, soldiers were deployed in Soweto on Tuesday morning.
News
11 months ago

Solar panels, batteries, sound systems, tyres, fridges, TVs, power tools and the list goes on. These are some of the high-end valuables that looters ...
News
11 months ago

ANC deputy secretary-general Jessie Duarte admitted that there were factions at each other's throats within the ANC but she was “not convinced” this ...
Politics
11 months ago