‘The tensions are so very close to the surface’: Tough choices for SA as insurrection smoke clears 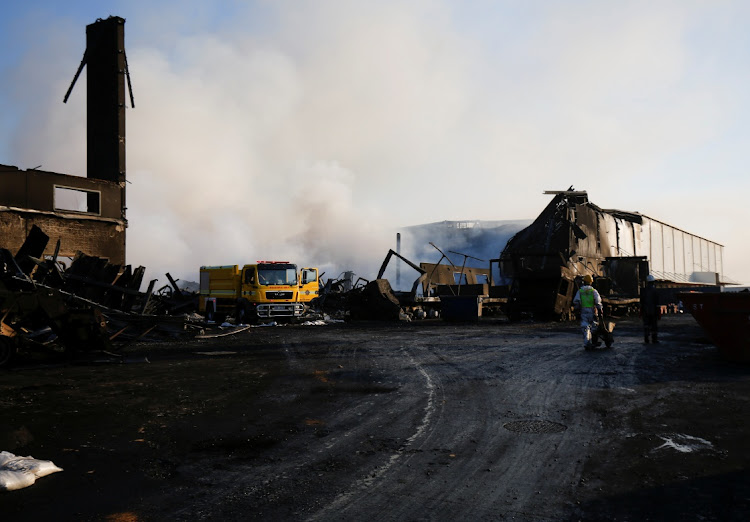 Members of a fire crew work at a warehouse burned during days of looting and unrest in Durban on July 17 2021.
Image: REUTERS/Rogan Ward

The unrest and violence that tore through parts of Gauteng and KwaZulu-Natal in July cost the SA economy billions of rand in lost output and destroyed infrastructure, and is likely to happen again if the country’s structural inequality is not urgently addressed.

“The events of three weeks ago could be a precursor to something bigger,” acting minister in the presidency Khumbudzo Ntshavheni said on Tuesday night.

Addressing an online briefing hosted by the Hellenic Italian and Portuguese Alliance of SA entitled “South Africa After the Unrest”, Ntshavheni said the country was one of the most unequal in the world.

Also taking part in the discussion on the economic and unifying impacts of the unrest on the country were Zev Krengel, vice-president and former national chairperson of the SA Jewish Board of Deputies, and Business for SA (B4SA) health working group chairperson Stavros Nicolaou.

“How do we change the income levels?” asked Ntshavheni.

Zev Krengel, vice president and former national chairperson of the SA Jewish Board of Deputies

“SA works at its best when it is a public-private partnership,” he said.

B4SA’s Nicolaou said the violence and looting had cost SA an estimated R50bn in lost output, caused R1.5bn in damage in KwaZulu-Natal alone, put 150,000 jobs at risk and had severely damaged the country’s prospects in the eyes of foreign investors and the media.

After earlier predicting the  economy would grow by 0.5%-1% in the third quarter, Bloomberg and JPMorgan now estimate the economy would contract by 3% in the quarter, said Nicolaou.

“At an economic metric level, the consequences are clear.”

If there was any silver lining to the violence, however, it was that it showed South Africans stood for the rule of law and that society, as a whole, had “pushed back” against the looting and vandalism.

“We saw business and government working together, we saw taxi owners and federations, who are often regarded as villains, coming together to protect property,” he said.

“We demonstrated that South Africans respect the rule of law. These are all things investors are going to look at.”

There were fears the violence would put the brakes on SA’s Covid-19 vaccination rollout at a critical moment after it had started gathering pace.

Around 45,000 daily jabs were lost as vaccination sites closed in the affected areas and pharmacies were looted, and the daily national total fell to 145,000 during the first two days of the protests.

However, the number of jabs rose rapidly as the violence petered out.

Vaccinating as many people as quickly as possible was the most important driver to reboot SA’s economy, he said.

“The quicker we can open up again and start attracting tourists and investors, this is critical.”

Ntshavheni said business should foster entrepreneurs in communities and not pretend donations were a solution.

She called on business to mentor small businesses and help people find work.

Creating employment opportunities would, however, depend on accelerating structural reforms, Nicolaou said, including diverting a chunk of the higher education budget into creating entrepreneurs.

Government is the enabler while the private sector creates economic opportunities, he said.

Elizabeth Sidiropoulos, CEO of the SA Institute of International Affairs, said the country’s role in Africa rested on how it dealt with its political and economic problems and its “huge structural challenges”.

“I hope this is a wake-up call to how the tensions are so very close to the surface,” she said.

“We don’t want to experience that again.”

The ingredients have been present for many years in India and Brazil, and they’ve only become more toxic recently
World
1 month ago

Can we afford for government to dither on social grants when so many in our country are going hungry?
Opinion & Analysis
1 month ago

“Blade Nzimande has just written a film called The Insurrection. It’s a dramatic script which is not well researched and has no actors," said former ...
TshisaLIVE
1 month ago